Will McCain Family Betray Republicans For This? 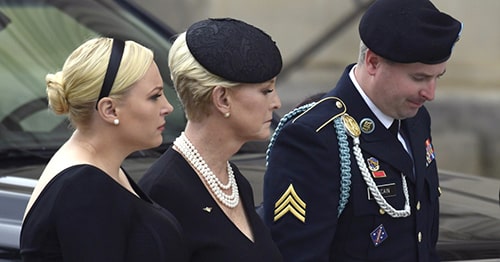 The rift between the McCain family and the Trump administration is reaching its breaking point and just one thing could send the family over the edge.

The Washington Examiner reports that although Megan McCain and her mother Cindy are Republicans like the late patriarch Sen. John McCain, sources reveal they may turn on the GOP if Joe Biden enters the presidential race.

“It’s undeniable that Joe Biden and the McCain family have a very close, personal relationship,” one source shared adding the move would be “about what’s good for him [Biden].”

Yet a separate source claims that such an endorsement would only come later down the road:

“The question is going to be timing and coordinating with the Biden campaign. There are a lot of moving parts there and [Biden’s campaign is] not necessarily organized. I wouldn’t expect a formal family endorsement because some of McCain’s family is still in the military, but I do expect Cindy to speak out at some point.”

Given the amount of heckling that has come from Megan McCain towards President Trump, would they be missed?