Who Could Have Known? Police Leaving Minneapolis PD in Huge Numbers 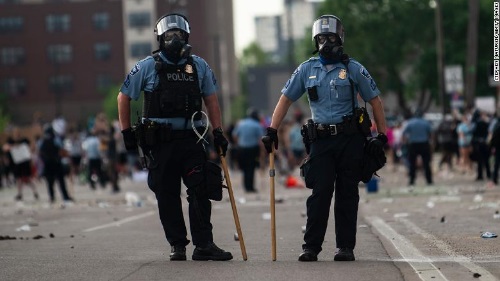 Weirdly enough, cops with the Minneapolis Police Department are leaving their jobs in droves. Two months after the death of George Floyd turned a significant portion of the city – including the city council itself – against the cops, The New York Times reports that “the Minneapolis Police Department is reeling, with police officers leaving the job in large numbers, crime surging and politicians planning a top-to-bottom overhaul of the force.”

Who could have possibly foreseen this completely predictable consequence?

The fact that nearly 200 officers with the police department have filed their resignation is actually just the tip of the iceberg when it comes to the problems plaguing the city. What may be worse is that many officers say they have scaled back their efforts to police majority-black communities in the wake of the Black Lives Matter outrage that has emanated from the protesting left. This, in turn, has allowed violence and crime to run rampant in those neighborhoods, exacerbating the black-on-black criminality that is (by far) the biggest threat to “Black Lives.”

“It’s almost like a nuclear bomb hit the city, and the people who didn’t perish are standing around,” one veteran Minneapolis cop told the Times. “I’m still surprised that we’ve got cops showing up to work, to be honest.”

Of course, this will all be quickly twisted by enemies of the police. They will say, Good, those police were probably racist brutalizers who don’t like the idea that they’ll have to face consequences. Or they’ll say, Terrific, that’ll make it that much easier to get rid of the police department altogether. Or they’ll simply say, Who cares? What matters is Black Lives. That’s all that matters.

But it’s not good and it’s not terrific and it definitely matters. Cops – especially in strife-filled communities like many areas of Minneapolis – have some of the hardest, most dangerous jobs in the country. What’s keeping them in those jobs? The opportunity to get rich? Not hardly. In every job, there comes the occasion to weigh the pros and cons of staying in the profession. And for cops, that is a considerable list on both sides of the ledger. Unfortunately, with everyone from politicians to prosecutors to people on the street turning on them, that con list has to be growing longer by the day.

So what happens when the smart, capable officers (aka, the ones who can actually go make a good living doing something else) decide to quit? Who will replace them? Well, that’s easy enough to answer, isn’t it? They’ll be replaced by those who can’t do anything else. Police departments will have no alternative to lowering their standards to recruit people willing to work in a hostile environment for lower pay, knowing all the while that one wrong move (or one sensationalized video) could mean the end of their careers, their national vilification, and maybe even the end of their freedom.

Then we’ll see what happens to the people in these underprivileged neighborhoods. Our guess is that the “trained Marxists” who founded Black Lives Matter will be unavailable for comment.