US Has No Official Evacuation Plan for Americans Outside of Kabul 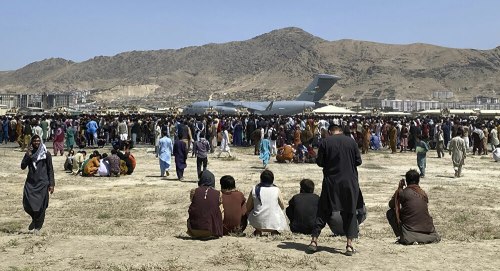 According to a report published on Tuesday, the United States has no official plans on how to evacuate Americans located outside of Kabul, Afghanistan.

During the Tuesday morning briefing, officials from different departments notified Senate staffers that they do not know a way of how to get Americans through the Taliban checkpoints installed outside of Kabul.

The U.S. has no plans to evacuate Americans in Afghanistan located outside Kabul, according to reports. Officials say that they do not know of a way to get those Americans through Taliban checkpoints. @JoeBiden said we planned for “every contingency.” 😫 https://t.co/oduYn5TWBI

In addition to this, a former contractor of the State Department also reported that Taliban insurgents also put up checkpoints throughout Kabul and surrounded the airport. Some sources even reported that the Taliban were beating people who attempt to go to the airport.

Meanwhile, Republican Senator Tom Cotton and his office initiated a hotline, particularly for those who are caught behind the Taliban fronts, according to the report of the Military Times. Cotton said that the situation in Afghanistan is dire, but they will do everything within their power to help Americans stay informed and help them get out of the country.

The exact number of Americans stuck outside of Kabul is not yet clear. However, up to 15,000 Americans could still be left in Afghanistan.

Biden’s national security adviser: They are going to hold on to the promise that the Taliban made

On the other hand, Jake Sullivan, Biden’s national security adviser, mentioned in a news briefing on Tuesday that the Taliban showed some willingness to give safe passage for civilians to the airport. He added that they will be holding on to that promise.

When Sullivan was questioned by a CBS reporter whether U.S. troops will be withdrawn from Afghanistan before all other Americans and Afghan allies are pulled out, he answered saying that he does not want to comment on hypotheticals.

Sullivan then posted a tweet on Tuesday, stating that when he was asked whether the Biden administration is going to pull Americans out of the country, he mentioned that is what they plan to do and what they will exactly do.

Biden’s national security adviser then claimed that they are presently completing this task with Hamad Karzai International airport operational and recently reopened. He then thanked U.S. troops and diplomats for their “incredible work”.

On Tuesday, the State Department told Americans and other civilians who are trying to flee Afghanistan to “shelter in place” until they are provided with more instructions from the U.S. embassy, amidst the weak security situation in the capital of Afghanistan.

Ned Price, spokesman for the U.S. Department of State, mentioned that their message stays the same for Americans and other people who have declared their interest to be relocated out of Afghanistan: stay sheltered in place until they receive a communication coming from the U.S. embassy.