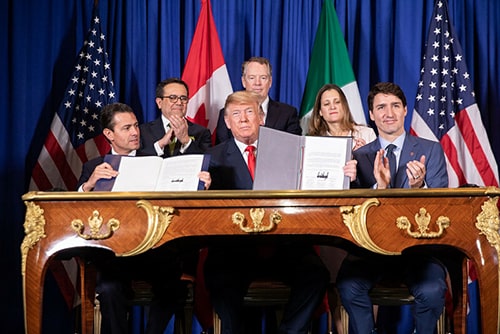 U.S. Rep. Richard Neal, whom Speaker Nancy Pelosi appointed to lead a working group tasked with resolving differences between House Democrats and the Trump administration on the pact, wants to move it to the Senate before Thanksgiving, according to House Agriculture Chair Rep. Collin Peterson.

That gives House members less than 10 voting days to approve the agreement. The Republican-controlled Senate would have to sign off by its Dec. 13 adjournment date for the pact to be approved by year's end.

Passage of the agreement is a priority for the Trump administration, which promised to buoy the U.S. economy by improving a variety of international trade deals. Republicans in the House failed to approve the proposal before losing their majority in mid-term elections in November 2018, and Trump has criticized Democrats who took over afterward for moving slower than he wants while focusing on an impeachment inquiry.

"We have a trade deal in place, but rather than actually passing legislation that will help the American people, Democrats want to stay focused on sham investigations. That's the first thing we can actually do to continue to improve the trade front," the Vice President's Chief of Staff Marc Short told FOX Business on Tuesday.

Pelosi "fiddles while the USMCA is in the deep freeze," White House trade adviser Peter Navarro told FOX Business in October. "The false narrative here is this whole issue about labor enforcement. That problem's effectively been solved."

To move USMCA forward, Neal has floated tying it to the Butch Lewis Act, his multiemployer pension bailout bill that passed the House in July.

Leaders from the three countries negotiating the deal signed as a precursor to their legislatures ratifying it. Mexico ratified the deal in June, while Canada appears on track to ratify the deal in its new parliament.