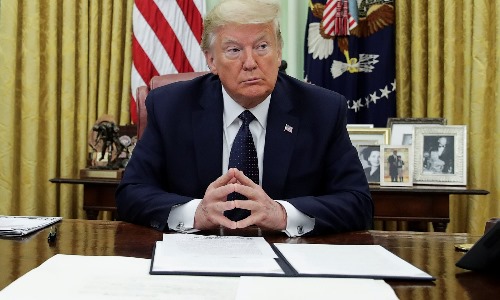 President Donald Trump took action on Thursday against social media giant Twitter. After the social network chose to label the president’s tweets inaccurate and encouraging people to access biased information about claims the president made about voter fraud, President Trump signed an executive order that strips the network of its liability protections if it continues to fail to be impartial

President Trump told the press after signing the new executive order that social media companies have enjoyed “unchecked power” up until now and that their position was “tantamount to monopoly.”

The executive order instructs the Department of Justice to create a new working group that consists of state attorney generals who will be required to enforce state statues that stop online platforms from taking part in “unfair and deceptive acts and practices.” The Federal Trade Commission, under the order, will also start an independent review of how social media giants like Twitter have taken advantage of their position for years.

Trump’s new executive order also tells federal agencies to stop using social media platforms to advertise if those platforms impose restrictions based on viewpoints. Perhaps most significantly, however, Trump’s order calls on the Federal Communications Commission to review the Communications Decency Act which gives liability protection to social media networks. It could result in networks like Twitter becoming liable for defamation and similar issues.

Traditionally, Twitter has been protected by Section 230 of the law because it is considered to be a neutral platform and not a publisher.

“As president, I’ll not allow the American people to be bullied by these giant corporations,” Trump said. “Many people have wanted this to be done by presidents for a long time. And now, we are doing it, and I’m sure there will be a lawsuit, and I’m also sure we will be going for legislation in addition to this.”

During a press conference in the White House, President Trump said he would prefer to get rid of his Twitter account completely if he didn’t have such bad coverage from the mainstream press.