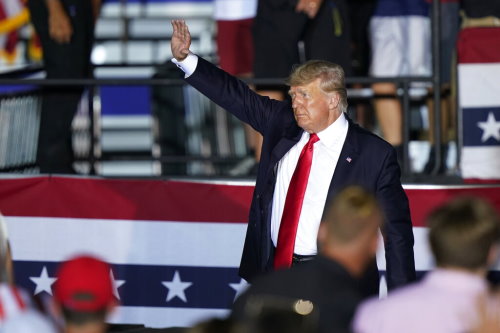 Last week, former President Trump published an ad entitled “Failure.” This ad showed a video montage criticizing the Biden administration over the hasty withdrawal of U.S. forces and the swift takeover of the Taliban in Afghanistan.

Republicans: Biden is not up for the presidency and now people are seeing the consequences

This weekend, in a fundraising email, Republicans emphasized they told the public that Biden was not up for the presidency. Now, the people are observing the disastrous consequences of Biden’s incompetence.

45: A heartbreaking loss for the United States and its great Military. We must have hostages released and our Military equipment returned, NOW! pic.twitter.com/jC1EbQzT0z

Since Trump left the White House seven and a half months ago, the former president has been repeatedly teasing another presidential run in 2024. If he follows up with his movements, the ad could be seen as the first campaign ad of Trump in the next presidential campaign.

A source from Trump’s circle noted that he thinks the Afghanistan disaster is an issue the public will deal with for a long time. For weeks, Biden has been suffering fiery criticism on how he handled the thoughtlessly organized departure from Afghanistan.

While Biden has persistently declared the withdrawal of U.S. troops as a success, the U.S. forces evacuated around 120,000 people. Included among them were over 5,500 Americans, as Kabul fell into the hands of the Taliban.

“A total of 83% of Republicans think Biden should be impeached, 58% of Independents, and 40% of Democrats.”

It’s time for Biden to be impeached. https://t.co/ip0F05lECH

Since then, Biden has been slammed by both Democrats and Republicans for underestimating the Taliban forces and overestimating the strength of the U.S.-supported Afghan government and forces. The criticism coming from both parties is likewise creating effects on the political standing of Biden.

The hasty and disastrous withdrawal of U.S. troops took a toll on Biden’s political standing

Meanwhile, polls published last week have shown that the hasty withdrawal from Afghanistan (and the disaster that transpired in the region) is taking a toll on Biden’s political standing. His approval ratings have declined to below 50 percent.

Biden made a statement saying he takes responsibility for the withdrawal of troops; yet, at the same time, Biden blamed the former Trump administration for striking a deal with the Taliban. This deal allegedly called for the U.S. forces to leave Afghanistan by May 2021.

On the other hand, it can be noted that during the Trump administration, the U.S. forces deployed in Afghanistan were at their lowest number in the last two decades. However, Biden (who changed multiple Trump policies as soon as he took office in January) did not remove the agreement that Trump made regarding Afghanistan.

Then, this weekend, an email from Save America PAC was circulated. This email noted the disaster was Biden’s incompetence and his alone.

Representative Michael McCaul likewise emphasized that the fall of Afghanistan will be a stain on Biden’s political record and his presidency. He added that the president will have blood on his hands for what he did.