Trump Mocks Biden For Mixing Him Up With Bush 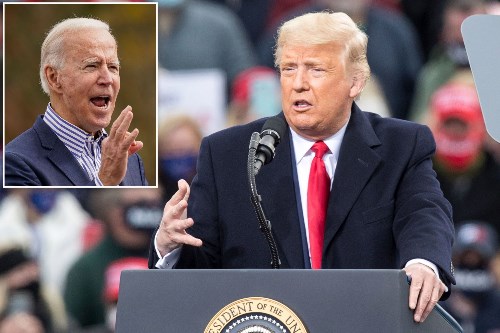 “Joe Biden called me George yesterday. Couldn’t remember my name. Got some help from the anchor to get him through the interview. The Fake News Cartel is working overtime to cover it up!” Trump wrote on Twitter.

Joe Biden called me George yesterday. Couldn’t remember my name. Got some help from the anchor to get him through the interview. The Fake News Cartel is working overtime to cover it up!

Biden mixed up the two presidents delivering a speech during an “I Will Vote” event on Sunday.

“The character of the country, in my view, is literally on the ballot,” the 77-year-old said. “Four more years of George, uh, George, uh, he, uh—we’re going to find ourselves in a position where, if Trump gets elected, we’re going to be in a different world.’

Biden appeared to receive a prompt from his wife Jill who was sitting next to him and seemed to softly say “Trump” as Biden repeated “George.”

Biden’s blunder came two days after he said during a campaign video: “We have put together, I think, the most extensive and inclusive voter fraud organization in the history of American politics.”

Trump Deputy Campaign Manager Justin Clark retweeted the video, writing: “People ask why the President fights so hard in court for ballot integrity? Why we have such an extensive Election Day Operations team? This is why.”

What a terrible thing for Biden to say! Rigged Election? https://t.co/jQXxeQCZU9

Also on Sunday, Biden was asked in an interview on “60 Minutes” about Trump’s attacks on his mental agility.

“He’s talking about dementia?” Biden responded. “All I can say to the American people is watch me, is see what I’ve done, is see what I’m going to do. Look at me. Compare our physical and mental acuity. I’m happy to have that comparison.”

Trump on Sunday ripped the former vice president for his light schedule after Biden called a “lid” early in the day, meaning he would have no more public events the press could cover.

“This guy has more lids, I don’t know, there’s something going on; somebody said it’s strategy, it’s not, because really strategy would be coming out,” Trump said in New Hampshire.

“Do you think that Sleepy Joe would be doing these things? I don’t think so,” Trump said. “He’ll go back to bed. Hillary [Clinton] used to spend a lot of time in bed, too. But she had more energy than him. She did.”