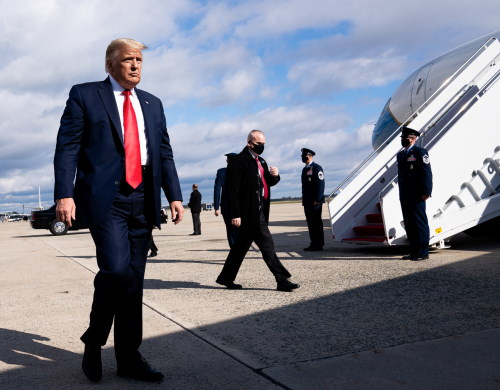 Republican Florida Governor Ron DeSantis will run in 2024 because he is sure he would win.

According to the report, Trump stated that it was DeSantis’ “right” to run if he did.

“I don’t know if he is running,” Trump said to The New Yorker. “It’s his choice. I believe I would win.”

While Trump has continually dominated DeSantis, a new straw poll done at the 2022 Western Conservative Summit found that DeSantis had 71% support while Trump had 68%.

A separate straw poll done at the Wisconsin GOP Convention found Gov. DeSantis narrowly edging out Trump, with 38 percent of the vote to 32% for Trump.

According to The New Yorker, an unknown consultant claims that despite Trump’s confidence in defeating Gov. DeSantis, the former president is planning how to keep him down.

“Trump World is working around the clock to find ways to damage DeSantis,” according to a top strategist.

The consultant said that the governor has been hearing he’s “next” for years.

“For the past four years, Ron has been told that he is Trump’s successor — that all the ladies want to sleep with him, and the males want to be him. He has heard that far too much.”

DeSantis has yet to indicate whether he will run in 2024, avoiding a question about the election on “Fox & Friends” recently.

“2022 is fast approaching,” co-host Pete Hegseth noted. “We know that President Trump is considering a run. Your name is on the list as well, we believe. Where does all of this sit in your thoughts right now?”

“It just sits there when people keep bringing up my name,” DeSantis remarked. “There’s a lot going on.”

DeSantis said he was focused on retaining his seat in Congress and serving the state of Florida.