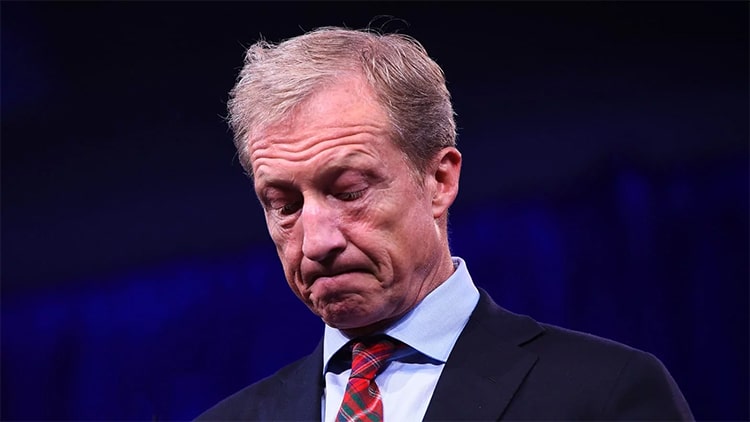 Former hedge fund manager Tom Steyer has spent years attempting to bring President Trump down. Even before announcing his candidacy for president, Steyer launched an initiative to get Trump impeached from office; this actually predated Democrats’ attempt to transfer Biden’s corruption with Ukraine over to Trump.

In the wake of the South Carolina primary election going in Joe Biden’s favor, Steyer ended his candidacy for president of the United States. According to Breitbart News, Steyer admitted that he no longer sees a path forward to becoming the 46th president. Why the now-former 2020 Democrat ever saw a path to the presidency remains unknown, but as of yesterday, Tom Steyer is no longer a candidate.

When announcing the end of his campaign yesterday evening, Steyer claimed that he launched his presidential campaign for “a really good reason.” Repeating his typical talking points about alleged “racial injustice,” Steyer also reminded his audience of a prior promise to bow out of the race when he ceased to see a path to victory.

The South Carolina marked the fourth state election where Steyer did terribly. The former hedge fund manager also failed to do well in the Iowa and Nevada caucuses and New Hampshire primary. After the same outcome in South Carolina, Steyer thanked his supporters and admitted that while he knows he can’t become president, he will continue focusing on issues that he views as important.

Like other past candidates before him, Steyer also vowed to support whichever candidate wins the nomination later this year. The former 2020 Democrat then didn’t hesitate to throw a cheap shot at President Trump by branding him as a supposed “disaster.”

Why Did Steyer Fail?

In truth, there are a series of factors that contributed to the demise of Steyer’s candidacy. Some of the most prevalent factors include his embrace of radical leftism and Trump Derangement Syndrome. Like other Democrats seeking office, Steyer chose to align himself with socialism and attack Trump at each and every turn.

Like Bloomberg, Steyer also employed the strategy of using his fortune to help him in the 2020 election. It didn’t work though; prior to dropping out, Steyer spent millions of dollars on ads in South Carolina and ultimately failed to even make a dent in the state.

With Steyer no longer in the race, only time will tell which candidate’s demise comes next.

Are you glad that Tom Steyer is finally out of the 2020 presidential election? Sound off with your thoughts on his failed candidacy in the comments section below!