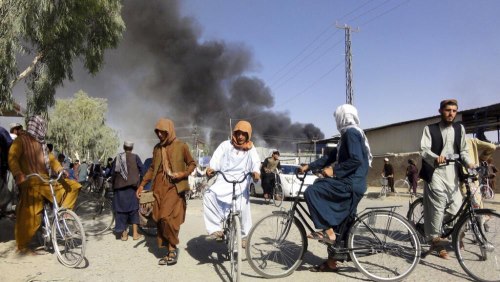 Biden is attempting to push back against claims that the United States’ credibility in the international community has been smeared. This comes a few days after the UK Parliament, as well as other NATO leaders, scrutinized the botched withdrawal of U.S. troops from Afghanistan.

On Friday, Biden delivered a speech from the White House, backing up his administration’s decision to withdraw the U.S. troops from Afghanistan. He was also trying to convince allies from different parts of the country that the world that U.S. still has credible foreign policy.

During his speech, Biden was asked about the global implications of the disaster in Afghanistan. The president responded, claiming that he had seen no question of their credibility from the U.S. allies all over the world.

Biden also added that he talked to the NATO allies of the U.S. and he hasn’t seen any questions in relation to the credibility of the U.S. Biden then claimed that in fact, he received the opposite, and instead, our allies were acting and committing to what they claimed they will do.

Biden’s remarks came two days after the emergency session of the UK Parliament on Wednesday talking about the swift fall of Afghanistan and the emergence of the Taliban forces.

Prime Minister Boris Johnson to Biden: U.S.’s decision to withdraw troops left the U.K. with no choice but to likewise withdraw their troops

Boris Johnson, Prime Minister of the United Kingdom, stated that the U.S.’ decision to remove troops left the NATO forces and the U.K. with no choice but to follow their movements.

However, the decision of the U.K. to likewise withdraw its troops (following the U.S.’s decision) also came under severe scrutiny from British veterans and lawmakers. They were calling the move a failure of duty and leadership. Biden was also badly criticized during the U.K. Parliament session.

U.K. Member of Parliament Tom Tugendhat sounds off on Pres. Biden for blaming the Afghan people for the Taliban resurgence:

“To see their commander in chief call into question the courage of men I fought with is shameful.”
pic.twitter.com/sw6At5hQ4K

Theresa May, former Prime Minister of the U.K., also expressed her concerns with the unilateral decision that was made by the United States to withdraw the troops.

May asked the lawmakers what this tells about NATO if they are completely dependent on the decision made by the U.S. Other NATO countries likewise directed their criticism towards the decision made by Biden. Included among them is Angela Merkel, German Chancellor, who labeled the abrupt withdrawal of U.S. troops an absolutely disturbing development.