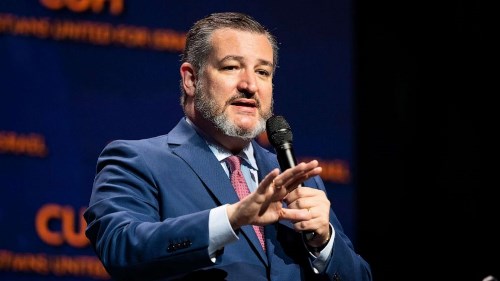 Sen. Ted Cruz came to Tuesday’s confirmation hearings loaded for bear. He patiently waited while Sen. Sheldon Whitehouse (D-RI) spent his time accusing the Republican Party of using “dark money” to produce the likes of Supreme Court nominee Amy Coney Barrett. And when Whitehouse was finally done making his unsupported, baseless accusations about the right and all of these shadowy groups who are supposedly finding these most extreme judges in the country, Cruz pounced with characteristic fervor.

His response to Whitehouse’s ludicrous theories may go down as one of the Texas senator’s finest moments.

“The senator from Rhode Island just gave a long presentation, complete with lots of charts,” he began. “I’ll say a couple of things on free speech. First of all, our Democratic colleagues, when they address the issue of so-called ‘dark money’ in campaign finance contributions, are often deeply, deeply hypocritical and don’t address the actual facts that exist.

“Here are some facts: of the top twenty organizations spending money for political speech in the year 2016, fourteen of them gave virtually all their money to Democrats and another three split their money evenly, so only three of the top 20 gave money to Republicans,” Cruz continued. “What did that mean in practice? That meant the top 20 super-PAC donors contributed $422 million dollars to Democrats and $189 million to Republicans. Those who give these impassioned speeches against ‘dark money’ don’t mention that their side is funded by ‘dark money’ with a massive differential.”

Cruz, noting that laws about dark money are often conflated with the Supreme Court’s ruling on Citizen’s United, said that the entire issue brought to light another avenue of Democratic Party hypocrisy.

“At the oral argument,” he continued, “there was a moment that was truly chilling: Justice Sam Alito asked the Obama Justice Department, ‘Is it your position under your theory of the case, that the federal government can ban books?’ And the Obama Justice Department responded, yes. Yes, it is our position that if the books criticize a political candidate, a politician, the federal government can ban books.”

Cruz said that it was only by the narrow window of a 5-4 Supreme Court decision that Americans saw their First Amendment rights upheld.

“When Hillary Clinton was running for president she explicitly promised every justice she nominated to the court would pledge to overturn Citizens United,” he reminded the Senate Judiciary Committee. “By the way, Hillary Clinton said she would demand of her nominees something you have rightly said that this administration has not demanded of you, which is a commitment on any case as to how you will rule. Democrats have shown no compunction in expecting their nominees to make a promise, “Here’s how I’m going to vote on a pending case, judicial ethics be damned.”

If Democrats keep going the way they’re going with these hearings, they are going to lose more than the battle to keep Amy Coney Barrett off the Supreme Court. Quite frankly, they are being made to look like fools.