Supreme Court Blocks Police From Entering Homes Without a Warrant 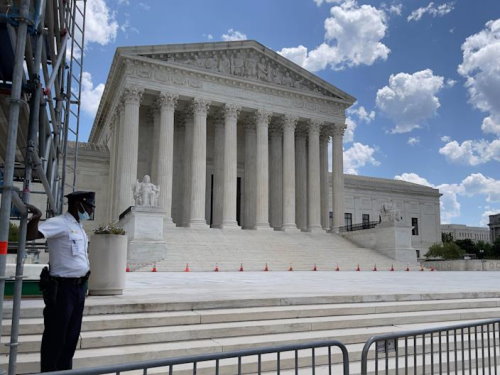 The Supreme Court unanimously rejected the Biden administration’s attempt to extinguish the Fourth Amendment by allowing law enforcement to enter private houses and confiscate firearms without the homeowner’s consent or a warrant.

In a 9-0 decision, conservatives and progressives alike found that the Fourth Amendment does not include a so-called “community caretaking” provision that would let police officers enter a citizen’s home to preserve the public good.

The issue arose when police officers entered a man’s home without a warrant or his consent because the man had indicated that he may commit suicide.

Officers then confiscated his firearms and took him to the hospital to undergo a psychiatric evaluation.

Gun Owners of America celebrated the Supreme Court’s protection of firearms from warrantless searches and seizures.

“The Supreme Court today smacked down the hopes of gun grabbers across the nation,” said Erich Pratt, senior vice president of Gun Owners of America.

“The Michael Bloombergs of the world would have loved to see the Supreme Court grant police the authority to confiscate firearms without a warrant,” he said. “But the Supreme Court unanimously ruled that the Fourth Amendment protections in the Bill of Rights protect gun owners from such invasions into their homes.”

The “community caretaking” exemption to the Fourth Amendment has been deemed acceptable for cases involving vehicles, but the Supreme Court has upheld the specific Constitutional protection for homes.

The Fourth Amendment guarantees the “right of the people to be secure in their houses, papers, and effects against unreasonable searches and seizures…”

President Joe Biden‘s Justice Department said in an amicus brief that law enforcement should have the right to disregard the Fourth Amendment for cases “objectively grounded in a non-investigatory public interest, such as health or safety.”

Before the Supreme Court’s decision, both a district court and an appeals court had sided with the Biden administration, arguing that the Fourth Amendment “does not prohibit law enforcement officers from diffusing a volatile situation in a home to protect the residents or others.”