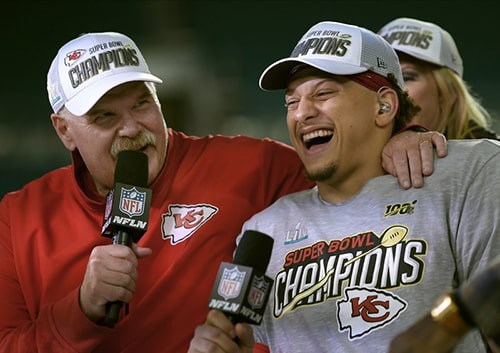 Asked during a press conference on Monday if he’d agree to visit the White House if the invitation were extended, Reid said without hesitation that he’d “be there.”

“I mean, I’ll be there,” said the coach, whose Super Bowl victory Sunday was his first in his much-celebrated decades-long career as an NFL head coach. “If they’re inviting us, I’ll be there,” he added. “It’s quite an honor.”

While Reid made a point of noting that they haven’t yet received the formal invitation, Trump signaled the traditional invite on Twitter following the Chiefs’ big win Sunday.

“Congratulations to the Kansas City Chiefs on a great game and a fantastic comeback under immense pressure,” Trump tweeted. “We are proud of you and the Great State of Missouri. You are true Champions!”

Missouri Sen. Josh Hawley (R) responded to Trump’s congratulatory tweet by expressing his excitement about seeing his state’s team honored but the president. “Can’t wait to see the Chiefs at the White House!” the senator wrote.

Though a celebratory visit to the White House used to be assumed among major championship winners, critics of President Trump have turned the tradition into a recurring controversy, with multiple high-profile athletes refusing to go, including some who have done so before being invited, or even winning the contest in question — like Sherman, whose team ended up losing 20-31 to Reid’s Chiefs on Sunday.

Asked a couple of weeks before the game by the San Francisco sports media if the team would accept an invitation to the White House should they win, Sherman replied, “I haven’t thought about it. We’ve got a long way between now and then, but I doubt it.”

As noted by TMN, Sherman’s “doubt” comment has resulted in some of the usual online blowback, including from Dan Bongino, what tweeted after the 49ers’ loss, “All doubts have now been erased.”

While Sherman said probably no to a White House visit, SF Gates notes, 49ers defensive end and defensive rookie of the year Nick Bosa, an open Trump supporter, likely would have gladly accepted. In fact, Bosa’s such a Trump fan that some folks took to Twitter to mock him after his team lost the game, as reported by Fox News.

Trump recently hosted the National Champion LSU Tigers and last year hosted the Clemson Tigers, whom he famously fed on his own dime, opting for fast food that the players delightedly devoured.