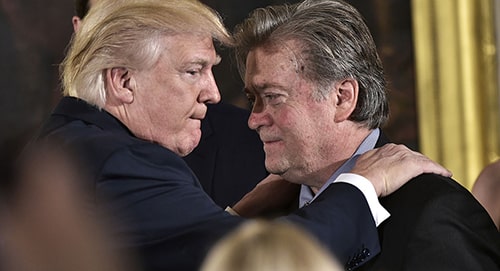 Former White House adviser Steve Bannon supported President Trump’s “doctrine” as protests are happening in Iran from the recent conflict, and Taiwan voters are rejecting the Chinese government.  He is even supporting Trump during the impeachment process but is giving a word of advice to the president, which could help him expose and destroy the Democrats even more Bannon is requesting that President Trump delay the State of the Union Speech to the nation and reschedule it after the Senate impeachment trial.  This would give the president more to reveal to the country about the truth of the Democrats with full proof in his corner.

Bannon was on Fox’s “Sunday Morning Futures,” where he said, “What President Trump did is go against the established order.  The permanent political class’s foreign policy was to appease these dictators, to appease Beijing, and that’s why saw the rise of China. To appease the mullahs in Iran, and that’s why you saw this expansion of Iran with Hezbollah throughout the Middle East.”

Bannon continued, “Donald Trump said, ‘This is not going to happen on my watch.’  He’s taken a very Churchillian stand like Churchill took in the 1930s. It’s the permanent political class, and the John Kerrys, the Hillary Clintons, the foreign policy establishment, the Neville Chamberlains, they were the appeasers. He went to economic war.”

Another suggestion came from the host of the podcast, “War Room.”  He slammed Pelosi and explained why top Democrats and Pelosi are “slow-walking” the so-called “Crime of the Century.”  He stated, “Two reasons Nancy Pelosi slow-walked this: One was to find more evidence because they didn’t have it and they’re afraid the guns are going to be turned back on them for a weak case. The second was to make sure she could bigfoot President Trump’s State of the Union. That’s why she slow-walked this whole thing.”

Bannon explained everyone wants to see “if the established order” can bring down the president.  It is highly unlikely, but it makes a great show!  So we can all get the popcorn ready.  President Trump wants former Vice President Joe Biden, his son Hunter Biden, Pelosi, and Democratic California Rep. Adam Schiff to take the stand in the Senate.  This would give the president so much to talk about in his State of the Union address.

There are a few different critical factors as to why Pelosi is holding on to the Articles of Impeachment and has not handed it over to the Senate.  She is not as dumb as she makes herself out to look.  Pelosi looks pretty foolish, but in the corrupt sense, she is very smart.  She knows her and the Democrats have shot themselves in the foot for good.  There is no evidence because President Trump did nothing wrong.

Last year, Pelosi tried to stop President Trump from doing the State of the Union because she was terrified he was going to expose them all with proof right then and there.  She had to approve his speech, in which Trump changed it after she approved the original so that the American people would get the truth.  That is why she was fumbling through the paperwork at last year’s State of the Union address.

Bannon says the president must give the State of the Union address on his terms, not Pelosi’s.  This is why Bannon is pushing so hard to have Trump delay the address to the American people.  Bannon is highly confident as are all Republicans that Trump is innocent and has been falsely accused of the “Crime of the Century.”  Bannon concluded, “He has to be acquitted; he will be acquitted and exonerated. That should happen, and then he should do the State of the Union.”