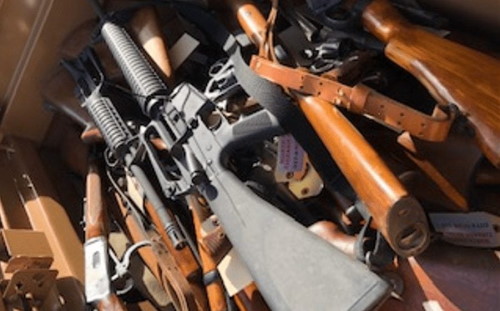 It’s no secret that President Biden and Democrat legislators are more than eager to get gun control passed into law. This is one critical reason why Republicans worked so hard to get former President Trump re-elected and to keep the Senate under a GOP majority.

Right now, things are not looking good. The Democrat Party managed to pass the $1.9 trillion American Rescue Plan without any bipartisan support. This is just the beginning, though, and Democrats are planning to use their congressional majority to pass even more costly and wasteful legislation.

Weeks and weeks ago, President Biden pushed Democrats in the House and Senate to put a rush on getting gun control passed. Now, Breitbart News is confirming that the Democrat-dominated Senate is set to vote on gun control legislation as soon as next week.

Here’s What You Should Know About Gun Control in America

🚨BREAKING: U.S. Senate insiders are reporting that Biden’s extreme gun control will likely get a hearing NEXT WEEK.

Anti-gun bills just passed the House. If they pass the Senate, the gun control will go to Biden to become law.

The bill known as H.R. 8 passed in the House with 203 representatives against the legislation, yet 227 in favor. Unfortunately, there are eight Republicans in the House of Representatives who voted alongside Democrats for stringent gun control measures.

On Monday, the National Rifle Association (NRA) sent out a warning to gun owners and other Americans alike. The gun rights organization stated that senators are expected to take up H.R. 8, noting that if the gun control bill passes, President Biden will undoubtedly sign it into law.

With Democrats in control of the House and Senate, protecting Second Amendment rights is a challenge, yet more imperative than ever.

Many Americans are concerned that the leftist gun control legislation will pass the Senate since Republicans aren’t the controlling party. If this happens, there is always the possibility of H.R. 8 facing legal challenges; however, the NRA and others, for now, are urging Americans to contact their senators and tell them to vote against this bill.

Democrats in Congress, along with the president himself, continue to run with the lie that gun control will save more lives in America.

Are you concerned that Democrats’ gun control bill will pass the Senate? What do you think the future of gun rights looks like in America? Be sure to share your thoughts with us in the comments section below.