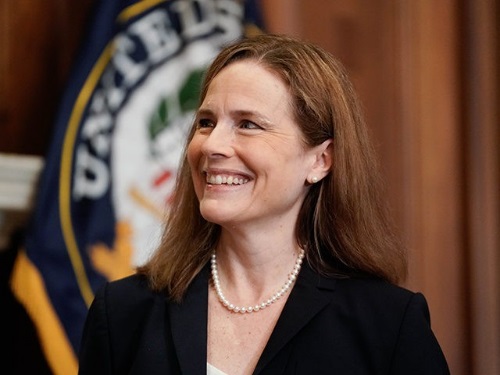 Within minutes of the Senate confirming Amy Coney Barrett to the Supreme Court, liberal Democrats ripped their carefully-placed masks off their faces and said they would indeed be packing the court if they get the opportunity to after the election.

“Expand the court,” Alexandria Ocasio-Cortez tweeted after Barrett was confirmed.

Minutes later, Rep. Ilhan Omar echoed that sentiment: “Expand the court. Remember that Republicans have lost 6 of the last 7 popular votes, but have appointed 6 of the last 9 justices. By expanding the court we fix this broken system and have the court better represent the values of the American people.”

AOC jumped back in at that point.

“Republicans do this because they don’t believe Dems have the stones to play hardball like they do,” she tweeted. “And for a long time they’ve been correct. But do not let them bully the public into thinking their bulldozing is normal but a response isn’t. There is a legal process for expansion.”

Of course, AOC’s take on the matter ignores the fact that A, Obama tried to do this exact thing in his final year as president, and B, it was none other than Democrat Harry Reid who originally got rid of the filibuster for federal judicial confirmations. Republicans under Trump have finally learned how to play this game, and what you’re seeing now is a party that is being forced to take some of their own medicine.

Of course, that’s if you even buy into the idea that confirming a Supreme Court nominee in accordance with the law and the Constitution is playing “hardball” in the first place.

The confirmation vote also drew an ominous tweet from Kamala Harris, who wrote: “Today Republicans denied the will of the American people by confirming a Supreme Court justice through an illegitimate process, all in their effort to gut the Affordable Care Act and strip health care from millions with pre-existing conditions. We won’t forget this.”

We would love to hear Harris explain, in detail, how this process was “illegitimate.” As far as we can tell, it was done in complete harmony with the law. Unless, of course, the idea is that a process is “illegitimate” if it fails to conform with Democratic Party wishes. Then, yes, we’ll concede that Barrett’s confirmation was illegitimate. But if we’re using the Democratic Party’s lexicon, it was also probably racist, misogynistic, and transphobic.

“Should we expand the courts? Let’s take a look and see,” House Speaker Nancy Pelosi said.

The Democrats carefully refused to acknowledge their intention to pack the courts up until now; apparently, the mask is off.

Hopefully voters – most of whom have said they reject the idea of expanding the Supreme Court – will keep that in mind as they go to the polls.