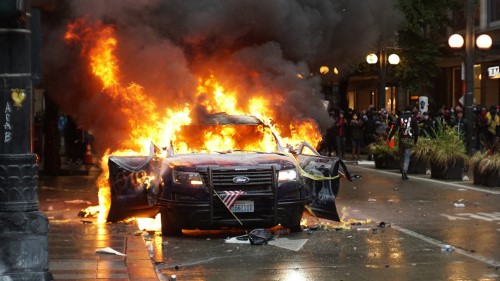 Seattle mayor is calling the city to rebuild the collapsed police force after six separate shootings shooked the biggest metropolitan area in Washington state over the weekend.

After a weekend of gun violence in Seattle, this morning around 8:30 a.m. there were reports of a shooting at Yesler Way. Witness video from Kiko Soto. https://t.co/WhfKk802Sh pic.twitter.com/LMtxdDlwNs

During a press conference on Monday, Mayor Jenny Durkan of Seattle stated that the city could not continue with the current depletion of the police force.

The Seattle mayor added that in the past 17 months, the Police Department in Seattle lost 250 police officers. She added that this number equates to over 300,000 service hours lost, claiming that the city is on its way to losing at least 300 officers.

Durkan further added that the violence that happened over the weekend is a reminder of how sworn police officers are required in certain emergencies.

The Seattle mayor mentioned that the city is building alternatives in relation to the city’s efforts in redirecting police human resources and funding to community-based organizations.

#Seattle @MayorJenny and interim Police Chief @adrianzdiaz addressed a string of shootings over the last 36 hours.

Durkan and Diaz both stressed challenges presented by the departure of 250 SPD officers over the last year and a half.

However, she maintained that the city still has an obligation to keep the constitutionally mandated policing, as well as responding to 911 calls. Durkan then claimed that the city needs both police officers and community-based solutions, and choosing between them is a “false choice.”

The Seattle mayor also added that she would submit a plan to restore the depleted police force by hiring more officers.

Durkan then admitted that the dropping number of police officers is “not unexpected,” particularly when leaders are talking about reducing the police department in half. However, she added that it is expected to lose employees since families want to have security.

Department workers and even police officers need to have a working condition that they know will support them and not just cut them. The Seattle mayor then claimed that the leaders and the government need a plan.

Six different shootings happened in Seattle over the weekend, and it left seven injured and four people dead.

According to the data released by the Prosecutors Office of King County, this year, the total shootings countywide is 33% higher in contrast with the numbers in the year 2017 to 2020 during the same time frame.

This year, the number of individuals shot in Seattle also increased to 61% in comparison with the same time frame in the past years.

Seattle has been in the middle of the public debate about defunding the police. The call intensified after the death of George Floyd last year.

Last year, there was also a clash between the Seattle City Council and the Democratic city mayor with regard to police funding. In the end, Durkan denied the resolution, which attempts to remove the funding of the law enforcement.