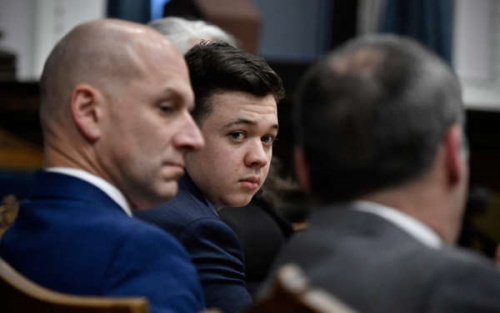 Last night, Fox News aired Tucker Carlson’s interview with Kyle Rittenhouse, the now nationally-known teen who was just acquitted for killing two men and injuring a third in a self-defense situation during the summer 2020 riots in Kenosha, WI.

For background, the case gained national attention for its political angle: it occurred during the latter half of the race riots that spread across cities all over the US last summer.  The optics of the case in particular (a white teen with a rifle running around in a town burned by protestors), along with the concurrent presidential campaign, pushed the story to the front pages of papers everywhere.

The incident itself was also partially filmed, which only further divided people on the shooting.  Conservatives largely rallied behind Rittenhouse while liberals mourned those he shot and focused on the use of an AR-15 by the teen.  Partisanship fully took hold when Rittenhouse was charged with first-degree murder and it was revealed that those he shot were left-wing protestors.

Returning to the present, Carlson’s interview with Rittenhouse is the first of its kind, and outside of his testimony during the trial, it was the first opportunity that the teen had to tell his side of the story.  Carlson began by making a few points, which happened to involve the facts of the case that were most often distorted by media outlets.

“Kyle Rittenhouse did not go to Kenosha looking for trouble; his father lived there,” Carlson said, before adding that “rioters threatened Rittenhouse’s life,” and forced him to act.

Turning to Rittenhouse, Carlson asked the teen to recount the events from his perspective.  When asked why he was there, Rittenhouse said that, “Kenosha is my community and I was upset to see my community up in flames,” before adding that his father lived there and that he had real ties to the town (even though it was across state lines from where he lived in Illinois).

Rittenhouse talked about seeing the community in shambles in the early morning hours before the shooting.  He then stated that he “met with the owners of CarSource and offered to protect their business.”  The owners’ other stores had already been torched, and he wanted to help.

Carlson interjected and asked Rittenhouse where the police were, and why they were not protecting private businesses, to which Rittenhouse replied that he was unsure.  He added that, “the National Guard should have been called…Tony Evers, the governor, failed the community…”

The riots, lawlessness, and absence of police came across clearly in Rittenhouse’s remarks, which led Carlson to comment that it was still “hard to imagine this [was] happening in an American city.”

(Evers, a Democrat, was lambasted by President Trump in the summer of 2020 for his insouciance in the face of escalating rioting and large-scale property damage.)

Rittenhouse went on, noting that the situation deteriorated in the evening, and that he noticed “there were rioters with firearms…I remember it very distinctly.”

There were other indicators that there would be problems. Rittenhouse said that when he first encountered Joseph Rosenbaum on the street, he told him and his friends that, “If I catch any of you ‘MFers’ alone I am going to f-ing kill you.”

Carlson was surprised and asked for clarification.  “He walks up and threatens to kill you out of nowhere?”

Rittenhouse assured him that this happened and added that “’.”  Rittenhouse’s account made clear that Rosenbaum, a serial child sex offender, was seeking out conflict.

Finally, Rittenhouse concluded his retelling by describing the terror he encountered on the streets.  Police were nowhere and rioters were everywhere.  He was chased and assaulted by a crowd, and was attacked with rocks and a skateboard — two aspects of the ordeal that are rarely covered.

Later on, Rittenhouse asserted that he rejected the politicization around his case.  He disavowed the rioting, which he called “opportunist…[for] taking advantage of the BLM movement,” which he said he supported.  Ultimately, his ordeal was “100% self-defense from the very beginning” and had nothing to do with race or racism, per Rittenhouse.

Awful as the night of the shooting was, one of the worst aspects of Rittenhouse’s ordeal is less known.  “Rittenhouse spent months in jail after turning himself into police, much of it in adult lockup, despite the fact he was a minor,” Carlson said.

The reason for this was because Rittenhouse’s attorneys left him there to fundraise off his name.

“Lin Wood was raising money on my behalf and he held me in jail for 87 days… disrespected my wishes and put me on media interviews that I should never have done,” Rittenhouse said.

“They said I was safer in jail than at home with my family…by September 5th, I want to say, they had raised $1m…I could have been bailed out by mid-September but they wanted to keep me in jail until November 20th,” he continued.

According to Rittenhouse, the trial gave him an understanding of the problems in the American legal system, as well as the pains of defamation.

From prominent congressmen to media figures and even the President, Rittenhouse was slandered, mischaracterized, and lied about to a national audience by partisans.  He spoke out to President Biden, imploring him to “understand the facts before you make a statement.”

Many of Rittenhouse’s critics, particularly Congressman Jeffries, are among the vanguard of the ‘criminal justice reform’ movement.  Given the riots in Kenosha and the recent terrorist attack in Waukesha, there are reasons to believe that the pro-crime trajectory in the country is setting the proverbial stage for future Rittenhouse-like confrontations.  The lesson of the trial is (or should be) that these types of tragedies can be avoided when the police can perform their job.