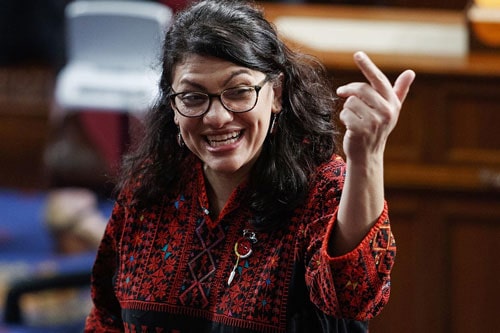 There are few things those on the progressive left love more than getting in a good dressing down of one’s opponents. So, of course, when an opportunity for such presented itself on Thursday, it’s so surprising that liberal “squad” member Rashida Tlaib of Michigan jumped at the chance. But, as usual, she didn’t have all of her facts straight and so wound up making a rather big fool out of herself than anyone else.
According to The Washington Post, Thursday held a meeting for the House Oversight Committee, of which Tlaib is a member, to keep oil and gas executives accountable for their company’s part in climate change and the overall destruction of our planet.

As reporters Maxine Joselaw and Dino Grandoni noted in the piece, it gave those like Tlaib the ability to “grill them about what Democrats say is their decades-long history of sowing doubt about the effects their products are having on Earth’s temperature and the stability of its climate system.”
No doubt it would have been a good look for the left, that is if certain members of their party were anything but incompetent.
Enter Rashida Tlaib and her accusations against oil giant Chevron’s CEO Mike Wirth.
Along with accusing Chevron of funding anti-environmental regulations and trade groups that support them, such as One Alaska and Colorado Rising, Tlaib claimed that Chevron had dealt the world a massive amount of damage and was refusing to pay for any of it.
She asked, “Mike, Mike Wirth, When are you going to cut the check?”

Now, this would be an answer-worthy question, had only Tlaib or the one being accused actually known what she was talking about. But as it turns out, neither of them did.
As Wirth said after a short pause and a rather confusing look on his face, “Congresswoman, I’m not sure I understand the context of your question.”
Tlaib then explained that according to her sources, the oil giant “has about 70 serious cases of environmental and community abuses in 31 countries worldwide, owing over $50 billion in judgments and settlements.” And Tlaib wanted to know when Wirth was “going to cut the $50 billion check that you owe?”
But this didn’t really clear anything up for Wirth. He was still confused and uncertain as to what she was talking about. He said as much but told her he would be more than happy to review her sources and get back to her on the matter.
However, Tlaib didn’t like that answer and so went into a tirade about how he was “poisoning the planet” and couldn’t continue to “arrest the truth.”
It would have been an impressive moment for Tlaib – that is if she had had her facts right.
As you can imagine, oil companies like Chevron incur quite a bit of scandal and lawsuits against them. And more than a few of those against this company, in particular, are from other nations where they have previously done business.
Take Nigeria, for instance. According to Tlaib’s source, an Amazon Watch’s paper titled, “Chevron’s Global Destruction: Ecocide, Genocide, and Corruption, the company, along with a few others, owed the central government of Nigeria “between $2.5 billion and $5 billion” in taxes.
However, it’s important to note that the new tax bills arose only after a dispute settled last year between the central government and several local states ruled that the former would have to hand over roughly the same amount to the latter. And since up to $5 billion is a bit difficult to come up with, they decided to impose new taxes on Chevron.

A similar case was made against Chevron in Chad. Here, taxes were “assessed,” but only after the government decided to try to nationalize the assets of Chevron and other oil companies working in the nation. And after the nation’s funds from oil production were “frozen” by the World Bank when they failed to spend a portion of it on projects for the poor.
In Ecuador, where some $9.5 billion is supposedly owed, the company was blamed for a long list of oil spills and environmental threats in the 1990s. However, it has since been found out that, among other things, evidence of such was “fabricated” by a corrupt lawyer who has since been convicted of “conspiracy ad criminal conduct” and disbarred.
And these are just a few of the cases Tlaib claims Wirth owes an explanation for.
If only she had done her homework first, instead of skimming through the first anti-oil and liberal piece she found. No wonder he was confused…