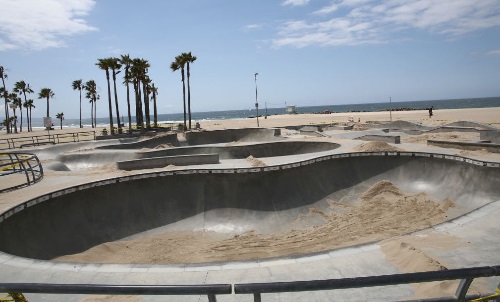 The wacky liberals in California are up to their insane methods of forcing people to obey their demonic wishes. The stay at home order has been forced on people in the Democratic-controlled state.

It was decided by the Democrats that one skate park was to be filled in with 37 tons of sand to keep the skaters out of the park during the stay at home orders. Instead of issuing citations or arresting the violators, they decided to destroy the park with a bunch of sand.

It should not surprise anyone that this kind of thinking has happened again. The Democrats in the state blamed the fires on people using their air conditioners. And they also think that illegals deserve benefits instead of legal residents. The Democratic mindset is so perverted that it can no longer think in American terms. It sees the American people as the enemy instead of fellow countrymen.

The desire is to keep people from using the park. Backfilling the area with sand only destroys the park for future use. It will cost more to repair the damage from the sand than it would be to simply issue citations for illegally using the park.

There is no common sense by the Democrats acting this way. They seek to control people and when they cannot motivate them to obey, they force them into submission with reckless actions and decisions.

But all is not lost for residents that loved the park. All of the sand that the lunatics were hoping would keep people out has drawn a new kind of sport to the area. The park is being used by dirt bikers.

There are also people taking advantage of the sand and acting like they are on the beach. Only showing that people are tired of the insane laws and decisions that they Democrats are making in the state. The liberal nutcases just do not know what to do with all the people. They are incapable of thinking their way out of this issue.

One resident named Connor Ericsson stated that “The fact the city put the sand in there to try to social distance everyone – I think it’s a big joke. These kids are cooped up inside their houses, they just want to go to the skate park and have some fun.”

Some of the people that live around the park helped put in place just so they could later play in it. Ericsson also stated, “As soon as the skaters showed up, we got a broom and a shovel and we helped them sweep that thing out, get the sand out there so they could do a little social shredding themselves.” Just a big slap in the face of the liberals.

At first, the silly Democrats tried to post no trespassing signs but everyone knows that the parks are public domain so that did not work out well. Next, they added the sand. Which only lets people enjoy fun in the sand. At the time of the filling the city of San Clemente, home of the park, only had 43 cases for the entire area.

Nothing of that nature is truly free. There is always a cost when it comes to moving dirt around. The city officials also admitted that they copied what other parks were doing to keep people out of the area. Proving that they cannot think for themselves.

Park users were glad to see the sand show up. They got to act like they were at the beach. There is no end to the American imagination when it comes to invention and having fun.

If dictators take away a person’s fun, they will simply invent new ways of making fun happen. America is the greatest country in the world and the people are the reason why that it is true.