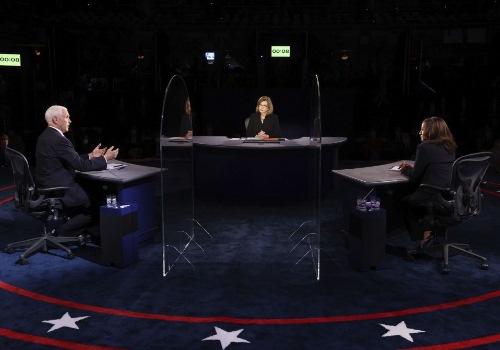 A short time later, VanderKlippe posted a video to Twitter, writing: “What it looks like when China censors a vice-presidential debate after a question about China is asked – and then lifts the blackout when conversation appears set to move on.”

In the video, Harris can be seen saying, “Susan, the Trump” which is then followed by her saying, “administration’s perspective, and approach to China has resulted in the loss of American lives, American jobs and America’s standing.”

What it looks like when China censors a vice-presidential debate after a question about China is asked - and then lifts the blackout when conversation appears set to move on. pic.twitter.com/JgV5yEq7JU

During the debate, Pence made strong remarks on China, which is widely considered to be the greatest threat to the United States.

“China is to blame for the coronavirus and President Trump is not happy about it,” Pence said. “He’s made that very clear, made it clear again today that China and the World Health Organization did not play straight with the American people. They did not let our personnel into China to get information on the coronavirus until the middle of February.”

“Fortunately, President Trump, in dealing with China from the outset of this administration, standing up to China that had been taking advantage of America for decades in the wake of Joe Biden’s cheerleading for China,” Pence continued. “President Trump made that decision before the end of January to suspend all travel from China. And again, the American people deserve to know Joe Biden opposed President Trump’s decision to suspend all travel from China. He said it was hysterical.”

Sen. Marco Rubio (R-FL) wrote: “You mean the part where she talked glowingly about how popular Xi is in some Pew poll?”

You mean the part where she talked glowingly about how popular Xi is in some Pew poll? https://t.co/nZdgtAwGJt

Sen. Josh Hawley (R-MO) wrote: “Tells you everything you need to know.”

Tells you everything you need to know https://t.co/Fx8xQzaiPF

Top U.S. officials, including national security adviser Robert O’Brien, have stated that China is “trying to elect” Democrat presidential nominee Joe Biden. Biden has repeatedly downplayed the threat that China poses to the U.S. and recently refused to call China an “opponent” during a CNN town hall.

National Counterintelligence and Security Center (NCSC) Director William Evanina said in a statement last month the following about China as it pertains to foreign nations looking to interfere with U.S. elections this fall:

We assess that China prefers that President Trump – whom Beijing sees as unpredictable – does not win reelection. China has been expanding its influence efforts ahead of November 2020 to shape the policy environment in the United States, pressure political figures it views as opposed to China’s interests, and deflect and counter criticism of China. Although China will continue to weigh the risks and benefits of aggressive action, its public rhetoric over the past few months has grown increasingly critical of the current Administration’s COVID-19 response, closure of China’s Houston Consulate, and actions on other issues. For example, it has harshly criticized the Administration’s statements and actions on Hong Kong, TikTok, the legal status of the South China Sea, and China’s efforts to dominate the 5G market. Beijing recognizes that all of these efforts might affect the presidential race.