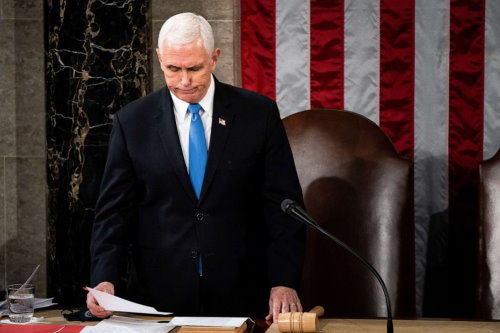 Former Vice President Mike Pence made some fiery statements against the media, noting how they focus on the January 6 Capitol riot and ignore Biden’s “weakness.”

Pence declared the mainstream media is focusing on a single day in January, instead of looking at Biden’s weakness

Recently, a report surfaced declaring the House Select Committee is investigating the attack on the U.S. Capitol; they also are looking into the actions of Pence leading up to the certification of Biden’s election win. This prompted the former vice president to fire back during his appearance on Fox News.

Pence blamed the mainstream media for giving the January 6 riot so much attention, noting he knows the media wanted to distract people from the failed agendas of the Biden administration.

The former vice president then argued the focus of the media on the riot is meant to demean the intentions and the character of Americans who supported the Trump-Pence administration in 2016 and 2020. It’s meant to demean 74 million voters who thought the country could be prosperous and strong again.

Former Vice President Mike Pence assailed the mainstream media for its obsession with the Jan. 6 Capitol attack, saying it was a way to "demean" supporters of former President Donald Trump and avoid focusing on the current administration's failed policies. https://t.co/Z8rMK7f5r5

Pence added he absolutely believes everyone should remain focused completely on the future, noting that is where he’s focused. The remarks echo the same sentiments made by House Republicans who resisted the efforts to push for the investigation into the events leading to the US Capitol riot.

The remarks made by the former vice president came hours after a Democrat lawmaker in the House told the Washington Post Pence’s actions could be included in the scope of the investigation.

On the other hand, a recent report by the New York Times alleged Pence considered a plan presented by a lawyer of Trump, John Eastman. This alleged plan would’ve had (during the certification of the results) Pence declare Electoral College votes coming from states disputed by Trump as “invalid” results.

Although the alleged plan was never enacted, the Times alleged in a report the former vice president considered pushing for the plan during the meeting with Trump and Eastman at the Oval Office. The report likewise added that Pence and his staff proceeded to consider the plan, days after the meeting.

During his appearance on Fox News, Pence also emphasized indeed the January 6 riot was a tragic day in U.S. history. However, they were able to finish their work, due to the help and efforts of Capitol Police and other federal officials in securing the building.

Pence then revealed a few days after the Capitol riot, Trump and himself sat down and talked about it all. Pence then added he can assure the people they parted amicably at the end of the Trump-Pence administration.

The former vice president also noted how he and Trump talked a couple of times since they left office. However, still, Pence believes the complete focus of Americans today should be on the future.