Pelosi Ok With Destruction Of Statues 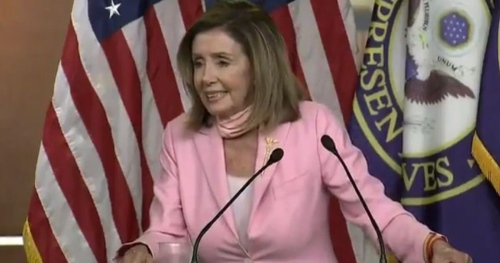 Speaker of the House Nancy Pelosi supported the violent mob that toppled and destroyed the statue of Christoper Columbus in the city of Baltimore. Pelosi told reporters on Thursday that she was not opposed to the violent destruction of the statue which happened on Independence Day in Baltimore. “People will do what they do,” Pelosi said, in an attempt to justify the destruction that was wrecked by the leftist mob that she is encouraging.

It was a mob of Black Lives Matter protestors who attacked the statue, which was located in the Little Italy section of the city. They tore it off from its pedestal and dragged it off to the harbor where they dumped it in the water. Ironically, the statue was erected to honor immigrants from Italy. The statue was dedicated by President Ronald Reagan in 1984. The ignorant vandals actually destroyed a monument that was dedicated to the diversity of the United States.

While Pelosi claims that she represents San Francisco in the House of Representatives, she was originally from Baltimore. That means she has close ties to the city. In fact, her father was a former mayor who oversaw the dedication of statues for Confederate generals way back in 1948. But now Pelosi is claiming that she does not care much for status. “I don’t — again, if the community doesn’t want the statue there, the statue shouldn’t be there. Doesn’t diminish my pride in my Italian-American heritage, and the fact that it was a country discovered by an Italian, named for an Italian, Amerigo Vespucci. So — I have that pride. But I don’t care that much about statues,” Pelosi added.

She is just demonstrating the hypocrisy of the left when it comes to defacing statues. They are perfectly fine with it but when the memorial being defaced is something that they claim to be their own then it’s not okay. That’s exactly what happened to the couple that painted the Black Lives Matter Graffiti on a street. They are now facing charges of hate crime.