Patricia McCloskey's ​gun was inoperable when seized, so a St. Louis prosecutor ordered crime lab to reassemble it and make it operational 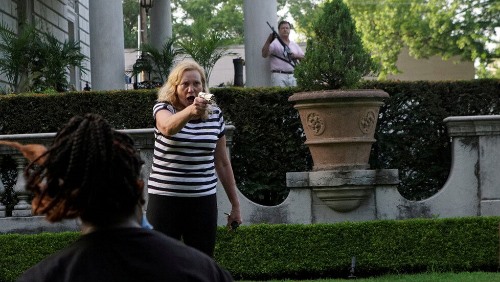 The St. Louis couple says the gun was a 'prop' for a court case and has been disabled ever since

The handgun Patricia McCloskey was armed with when a large group of protesters marched near her home in St. Louis was inoperable when seized by police. A St. Louis prosecutor ordered the crime lab to dismantle and then reassemble the firearm to make it functional, according to a report from KSDK-TV

St. Louis couple Mark and Patricia McCloskey brandished firearms after 500 protesters marched into a gated community in the affluent Central West End neighborhood on June 28. The two St. Louis attorneys stood outside their home and were ready to protect their property.

St. Louis police served a search warrant on the McCloskeys earlier this month. Police confiscated the couple's guns that they were holding during the encounter with demonstrators in June — an AR-15 and a handgun. Patricia McCloskey's handgun was inoperable when it was seized by law enforcement.

The McCloskeys said that the handgun was purposely made inoperable. The firearm was allegedly used as a "prop" so that it could be brought into a courtroom for a lawsuit the couple once filed against a gun manufacturer. The handgun had its firing pin rendered inoperable to make it safe to bring into the courtroom. The couple claim they never reassembled the gun to enable it to be functional.

Mark McCloskey appeared on "Tucker Carlson Tonight" earlier this week, where he hinted that the firearms were taken by law enforcement to see if they were operational and that there would soon be "some revelations."

"The technicality of the law is, they have to determine whether or not the weapons were readily capable of being fatal or causing serious bodily harm, and so they have to take them and test them and that sort of thing," McCloskey told Tucker Carlson. "There will be some revelations about that."

A member of Circuit Attorney Kim Gardner's staff ordered crime lab experts to disassemble and reassemble the handgun. Once it was reassembled correctly, the gun was "readily capable of lethal use."

"Assistant Circuit Attorney Chris Hinckley ordered crime lab staff members to field strip the handgun and found it had been assembled incorrectly. Specifically, the firing pin spring was put in front of the firing pin, which was backward, and made the gun incapable of firing," according to documents obtained by KSDK.

Prosecutors had the crime lab reassemble Patricia McCloskey's handgun. The crime lab test-fired the handgun successfully. It was restored as a "deadly weapon" on Monday.

Also on Monday, St. Louis Circuit Attorney Kim Gardner filed charges against the McCloskeys with a felony count of unlawful use of a weapon.

Gardner alleged that the McCloskeys waved their weapons in a "threatening manner" at "peaceful, unarmed protesters."

"It is illegal to wave weapons in a threatening manner at those participating in a nonviolent protest, and while we are fortunate this situation did not escalate into deadly force, this type of conduct is unacceptable in St. Louis," Gardner wrote.

The McCloskeys' attorney, Joel Schwartz, told KSDK that the St. Louis couple intentionally misplaced the firing pin on the handgun and that it was in that condition when Patricia McCloskey waved it at protesters and when it was turned in to their former attorney Al Watkins.

"It's disheartening to learn that a law enforcement agency altered evidence in order to prosecute an innocent member of the community," Schwartz said.

On Sunday, Missouri Gov. Mike Parson (R) said he would consider a pardon in the McCloskeys' case.