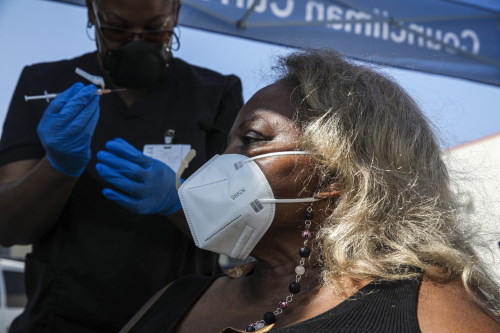 On Thursday, a massive correction was issued by the New York Times, a very liberal newspaper. This came after the Times severely distorted the number of COVID cases among children in the U.S. by over 800,000.

A report by New York Times was saturated with errors, misreporting COVID cases by over 700,000

A report by Apoorva Mandavilli, published by the New York Times about vaccine strategy for children, was filled with errors before the newspaper issued major changes in the story.

According to the initial report, almost 900,000 children were hospitalized for COVID since the beginning of the pandemic. However, the actual data and the corrected report are now saying over 63,000 children got hospitalized with COVID from August 2020 up until October 2021.

New York Times likewise distorted actions taken by regulators in Denmark and Sweden and even botched the timing of an important meeting made by the FDA.

The New York Times issued a correction Thursday saying it severely misreported the number of child COVID-19 hospitalizations in the United States by over 800,000 cases.#covid https://t.co/ySs51EWUNF

Then, later on, the NYT admitted in a lengthy correction that the earlier version of the report incorrectly characterized actions taken by Denmark and Sweden. They noted the countries halted the distribution of the Moderna COVID vaccine to children and they have not started giving out single COVID doses.

The Times likewise admitted how they overstated the number of COVID cases for children in the United States, saying the real data is 63,000 (and not 900,000) since the start of the pandemic.

They furthermore admitted they misquoted the timing of the meeting of the FDA on the authorization of the Pfizer COVID vaccine for children; it is later this month and not next week, contrary to the previous report.

The massive string of errors triggered other journalists and critics to slam the very liberal newspaper. Jeryl Bier, a journalist, questioned how a mistake as big as that could happen with the New York Times.

Phil Kerpen, a columnist, likewise sarcastically commented that with the inaccurate article details, the reporter was merely meeting the “usual standards” of the New York Times.

I see this NYT reporter is meeting her usual standards today. pic.twitter.com/zZ3OV348PU

Prominent journalist Glenn Greenwald also mocked the paper. Greenwald stated how the newspaper had a highly experienced and outstanding COVID reporter. However, he was fired only because he made rich teenagers frustrated on a trip.

This was referring to NYT reporter Donald McNeil Jr. who was forced to resign earlier this year after being accused of making racially offensive remarks during an organized trip to Peru back in 2019.

Greenwald added that now, the Times has an incompetent reporter in his place who is constantly making these errors. Either that or he’s claiming it is racist to investigate the origins of COVID, referring to Mandavilli who previously suggested the “lab leak theory” has racist motives.