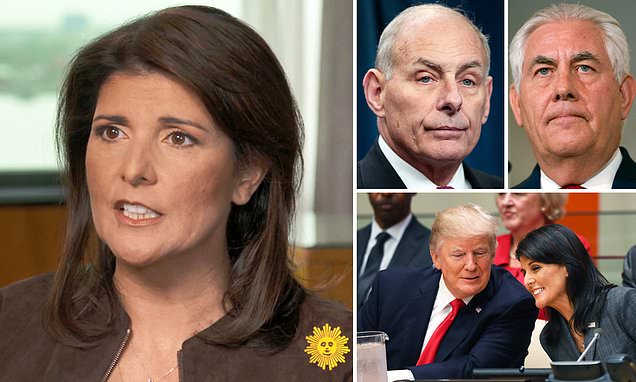 "Kelly and Tillerson confided in me that when they resisted the president, they weren't being insubordinate, they were trying to save the country," Haley wrote in her soon to be released book, "With All Due Respect."

"Tillerson went on to tell me the reason he resisted the president's decisions was because, if he didn't, people would die," she added, saying the work against the president was taking a "dangerous path."

Haley describes a meeting with Tillerson and Kelly, both of whom had differed with Trump on pulling out of the Paris climate accords and other decisions. Haley wrote that Tillerson and Kelly believed they were trying to "save the country," but she remembers thinking they were only trying to impose their own beliefs.

"I was shocked," she wrote.

In a response to the book allegations, Gen. Kelly did not deny his work against the president's agenda from within the White House.

"If by resistance and stalling she means putting a staff process in place . . . to ensure the [president] knew all the pros and cons of what policy decision he might be contemplating so he could make an informed decision, then guilty as charged," Kelly told CBS.