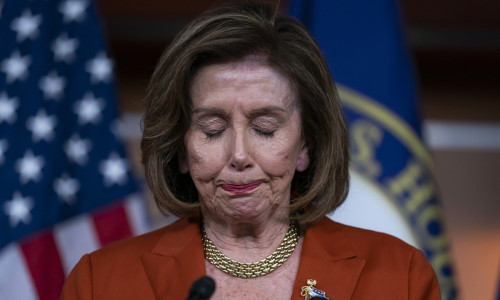 'When two police agencies give slightly different accounts of what happened in this high profile case... '

After NBC suspended one of its correspondents for reporting troubling claims about the alleged hammer attack on Paul Pelosi, another Bay Area NBC station is reporting on more inconsistencies and questions that have surfaced about the incident.

The new report, which includes some of the same details that were scrubbed and retracted from NBC’s Today Show segment, also raised renewed scrutiny of Pelosi’s actions on the night of the attack, along with providing additional details of the encounter, according to the Daily Mail.

In addition to questioning why Pelosi didn’t immediately seek assistance from police when they arrived on scene, and instead walked toward the alleged assailant while seemingly downplaying the severity of the situation, San Francisco’s local NBC Bay Area correspondent Bigad Shaban revealed new inconsistencies about official reports of the attack.

That included differences on who opened the door when police arrived, with the Department of Justice claiming in a federal indictment that it was the police and the San Francisco District Attorney’s Office claiming it was Pelosi.

“According to a source familiar with the investigation who personally watched the police body camera footage from that night, officers knocked on the door of the Pelosi home and then backed away,” Shaban reported. “And the video clearly shows Paul Pelosi open the door with his left hand.”

Shaban’s report added that, “as written in the DA docs, the source tells us the bodycam video shows officers having a brief conversation with Pelosi and David DePape, the man accused of breaking into the Pelosi home, before DePape starts beating Pelosi with a hammer.”

“Everybody reacts to situations differently and he will one day need to explain to potentially a jury why he did what he did and what thought process was going on in his mind,” she said of Paul Pelosi.

That raised more questions and apparent skepticism from Shaban.

“When two police agencies give slightly different accounts of what happened in this high profile case, it just feeds into conspiracy theories and that’s what we’re seeing right now on social media,” he said.

House Speaker Nancy Pelosi, D-Calif., has done nothing to quell the skepticism, actively using the attack on her husband as campaign fodder in the run-up to the midterm elections.

Nancy Pelosi, along with President Joe Biden, tried to tie the assault to the J6 protests and used it to once again paint Republicans as dangerous threats to democracy, even though Republicans had nothing to do with the hammering of Paul Pelosi.

“People say to me, ‘What can I do to make you feel better?’” Nancy Pelosi said in her first public comments about the incident before the midterms. “I say: ‘Vote!’”

Now that the election is over, can they release the full, unedited Paul Pelosi bodycam footage?