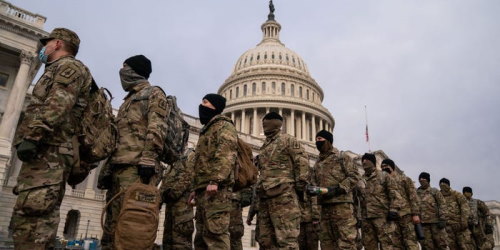 The National Guard’s extended stay in Washington, D.C. in the wake of the Jan. 6 Capitol siege cost taxpayers more than $500 million, according to the National Guard Bureau.

Congress requested the National Guard presence after the riot but dragged it out for several months longer than was necessary, according to Republicans.

The initial cost of the mission from January through March was estimated to be $410 million, and the request by House Speaker Nancy Pelosi, D-Calif., to keep the troops near the Capitol building for another two months cost an additional $111 million.

“There’s no reimbursal plan,” Pentagon spokesman John Kirby told the Washington Examiner Monday. “The thousand or so [members] that are still in the [National] Capital Region are preparing for departure.”

National Guard troops acted as “physical and barrier sentries,” according to Kirby, standing behind fences for long hours in the rain and snow even though no identifiable threat was ever announced.

All House Republicans voted against the bill.

However, Republicans could have stopped the bill from passing if two more members had been present to vote, which has led some to believe that House GOP leadership wanted the bill to pass but didn’t want to publicly support it.

“These airmen and soldiers protected not only the grounds, but the lawmakers working on those grounds, ensuring the people’s business could continue unabated,” Austin said in a statement.

“As these troops depart for home and a much-deserved reunion with loved ones, I hope they do so knowing how much the nation appreciates their service and sacrifice,” he added.