Nancy Pelosi Humiliated After Making This Claim About the Elections 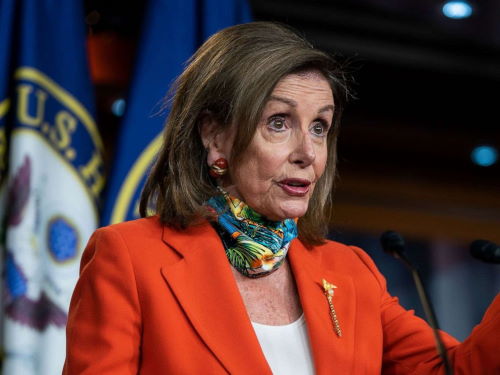 It’s a pretty sad fact that we have someone like Nancy Pelosi as Speaker of the House. The storied position of Speaker is supposed to bring the House together. They are supposed to bridge the gap between parties, for the good of the nation.

But old Nance has been nothing but a partisan foghorn for the Democrats. Not once in all her years as Speaker as she reached across the aisles. Her only priority, it seems, is ensuring Democrats maintain their shrinking majority.

Even with that, she is failing. Not that she’s willing to admit it. Because, despite all the signs, she claims that Democrats will increase their lead in November.

House Speaker Nancy Pelosi (D-CA) was ridiculed Wednesday for announcing House Democrats will pick up House seats and retain the majority, a projection that may prove itself to be overconfident…

“We’ve heard this one last cycle and know how it turned out. @SpeakerPelosi’s days in the majority are numbered,” National Republican Congressional Committee Communications Director Michael McAdams said.

Republican National Committee’s Deputy Communications Director Nathan Brand posted a meme on Twitter about Pelosi’s prediction. “Are you sure about that,” it read.

There have been plenty of developments over the last year that signalled an end to the Democrats’ majority in the House. Over thirty incumbent Democrats have fled the House, refusing to run for re-election. Polling still has generic Republicans beating Democrats–something that rarely happens, even when Republicans win.

And let’s not forget that inconvenient truth named Joe Biden. Biden has the worst presidency in U.S. history. His approval has continued to be South of 40%–lower than any president we’ve ever seen. And his constant failures will only be a drag on the party going into the midterms.

There is no reason Pelosi, or anyone else, should boast that they are going to hold onto their majority. Consider that their majority is literally five seats at the moment.

This is not 2020. Democrats can’t sit back and blame Republicans for the last few years. Liberals did nothing as Biden tanked our economy, trampled our constitutional liberties, and let chaos spread globally.

In fact, Democrats encouraged Biden’s radical, socialist, and failed agenda. And they continue to do so.

If anything, Pelosi should be preparing for the storm that will hit the party on November 9, the day after the election.

Perhaps she should retire now, and flee to Italy while she has a chance.