McConnell Shifts Gears, Would Back Trump as 2024 GOP Nominee 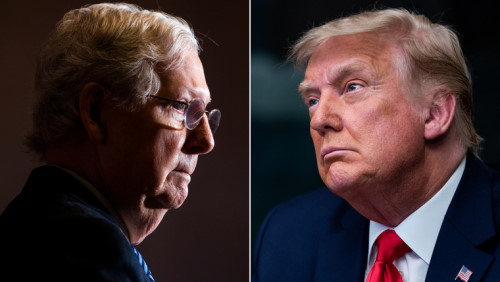 This month, the relationship between Senate Minority Leader Mitch McConnell and former President Donald Trump took a turn for the worst. Although McConnell ultimately voted for Trump’s acquittal in the infamous and second impeachment trial of the former president, McConnell also slammed Trump afterward.

Following the Senate’s vote to acquit the 45th president, McConnell professed that Trump unequivocally bore accountability for the January 6 insurrection. The former president would later respond to McConnell by slamming the Senate Minority Leader as “unsmiling” and essentially dead weight to the GOP.

For some reason, though, McConnell appears to have changed his tune on Trump, likely for political reasons. Breitbart News reports McConnell’s statements that he’d support the 45th president as the Republican nominee for the 2024 presidential race.

The About-Face from the Senate Minority Leader

Yesterday, McConnell spoke with reporter Bret Baier of Fox News. At a point during this interview, Baier questioned the Senate Minority Leader on whether or not he’d back Trump as the 2024 nominee of the Republican Party.

After stating that a lot can happen between this current point and 2024, McConnell explained that he knows of governors and four congressional members who are planning presidential runs in 2024.

Mitch McConnell tells Fox he'll support the Republican nominee in 2024, even if it's Trump.

Just days ago, McConnell said Trump is "practically and morally responsible for provoking" the Capitol insurrection.

After stating that the 2024 presidential race will be “wide-open” and “fun,” McConnell declared that he’d “absolutely” support Trump, should Trump become the party’s nominee again.

An End to GOP Infighting?

Many Republicans have warned that infighting in the GOP needs to stop for the sake of the party and the nation. As 2022 midterm elections get closer and closer, unity in the GOP is going to be a pressing part of winning these races.

McConnell’s declaration that he’d support Trump as the 2024 presidential nominee came as a surprise to many Americans. Democrats, of course, didn’t hesitate to slam the Senate Minority Leader.

Mitch McConnell says he would “absolutely” support Donald Trump in 2024 if he won the party’s nomination. pic.twitter.com/9wZvMH5ZlY

Do you think Donald Trump will end up being the nominee of the Republican Party in the 2024 presidential election? Also, what do you think about Mitch McConnell stating that he’d support Trump as the party’s nominee in 2024? Don’t hesitate to share your thoughts and viewpoints with us down below in the section for comments.