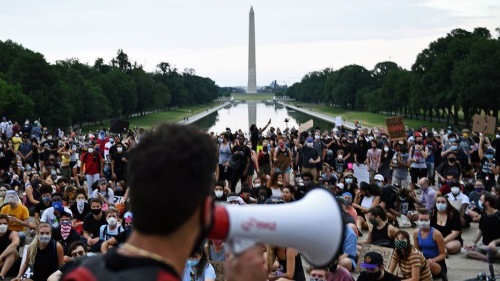 The United States goes off the gold standard, a monetary system in which currency is backed by gold, when Congress enacted a joint resolution nullifying the right of creditors to demand payment in gold.

Get ready for a wild weekend. We are going to see the biggest protest yet in Washington DC. The stakes are high for everyone involved and we are seeing the first real sign of the president’s power waning. President Trump had a very public disagreement with his defense secretary Mark Esper over the use of Army troops on the streets of Washington DC. Those troops are going back to their base today, leaving Washington D.C.. Do you really think the commander-in-chief wanted that to happen? He could have ordered Esper to have them stay, but he didn’t. This while the president is facing incoming fire from his former chief of staff, his former defense secretary and a Republican senator from Alaska. The president’s photo-op seems to have backfired on him. And Attorney General William Barr is trying to explain why protestors were removed for the walk from the White House to St. John’s Church. Will he say that under oath? Sen. Kamala Harris threw out that challenge.

Finally, the movement to defund and cancel police departments is picking up steam and there’s a meeting about it today in Minneapolis with at least one city council member saying he’s fulling in support of canceling the police department.

The nation’s capital is bracing for the largest protest yet on Saturday since the death of George Floyd, expanding a massive fenced perimeter around the White House, even as the Pentagon sent home hundreds of active duty troops positioned outside the city.

Over 10 days of protests, the security perimeter around the White House has increased, and on Thursday morning extended to the far outskirts of a park complex known as the Ellipse near the National Mall with extensive fencing and barricades.

That was in anticipation of a major event on Saturday, according to the local police department.

The DC chapter of the Black Lives Matter movement filed a lawsuit on Thursday accusing federal law enforcement officers of violating the constitutional rights of peaceful demonstrators who were forcibly cleared from a park north of the White House so President Donald Trump could walk through for a photo op earlier this week.

The lawsuit accuses officers of attacking the demonstrators without warning and using excessive force — including deploying incendiary devices such as flashbangs, tear gas, smoke canisters, pepper balls, and rubber bullets.

After Attorney General William Barr said Thursday that there was “no correlation” between the much-criticized clearing out of protestors in Lafayette Square and the president’s ensuing photo op with a Bible on Monday in front of St. John’s Church, Sen. Kamala Harris (D-Calif.) challenged Barr to say that under oath.

The End of Police?

The Minneapolis City Council has set an emergency meeting for Friday as councilmembers say the city will “dismantle” the Minneapolis Police Department in the aftermath of George Floyd’s death.

In a media advisory, a spokesperson says the council will vote on “a court order stipulating immediate changes for MPD and a framework for systemic change” while hearing from the Minnesota Department of Human Rights commissioner on the next steps in the state’s investigation into the department.