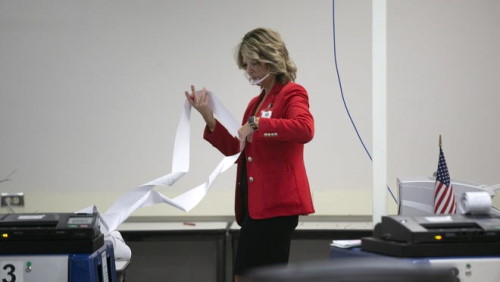 Many Americans are feeling anything but jovial about the fact that Joe Biden was inaugurated as president on Wednesday, feeling as if they had been cheated out of another four years of Donald Trump, who proved to be more than a little capable of handling the job of commander-in-chief.

For months now, conservatives and right-leaning media have been calling foul on the results from the 2020 presidential election. And there’s lots of justification for such a call. We’ve witnessed tons of videos and eyewitness testimony come forward that proves voter fraud played a huge role in getting Biden elected over Trump.

One of the key battleground states where many lawsuits and discussions took place about how the results needed to be audited was Arizona. Specifically Arizona. According to Gateway Pundit, officials in Maricopa County are now, finally, two months after the fact, agreeing to audit the presidential votes.

You know, now that inauguration day is over with and all that.

It seems pretty obvious that these folks know they cheated. What’s really aggravating is how they aren’t even making any efforts to try and hide what they’re doing. And if you dare to speak up boldly against the fraud, along comes tech giants to shut you up by booting you off their platforms. And if you thought this stuff was bad, just imagine how much worse it will be with Biden in office.

ARIZONA: After 3 months of requests Maricopa County announces they will audit the vote pic.twitter.com/6tRkLc6DLR

Back on December 15, officials in Arizona issued a forensic audit for Maricopa County to be completed. Then, on December 18, the Maricopa Board of Supervisors says “no way” to all that and refuses to comply with subpoenas to hand over the Dominion voting machines for the audit.

A few weeks later, on December 30th, the Arizona Attorney General got involved in the fight for the forensic audit in Maricopa County. And then, on January 20, Inauguration Day, the officials finally agree to do the audit.

This cannot be a coincidence. Again, these individuals know they have cheated the American people out of their rightful president. It’s shameful that something hasn’t already been done to bring these people to justice. Let’s hope the truth comes out and those responsible for this mess are held accountable.

If not for the sake of justifying the president, at least so we can protect the future of our elections at the national level. These are critical for determining the direction our nation takes in the future.