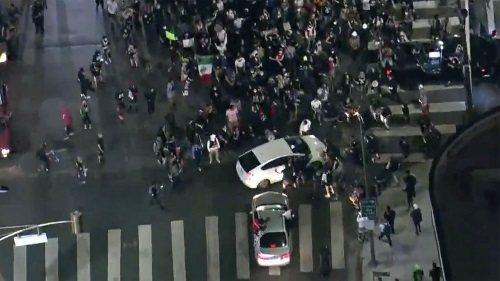 For the mainstream media, Louisville was just the chance for more lies.

As word spread that a grand jury decision in the Breonna Taylor shooting was close at hand, anyone paying attention knew the Kentucky city was in for a rough night of rioting.

Anyone paying attention also knew the mainstream media would cover for the looting and destruction by savages in the name of social justice.

But with its initial report on an attack that nearly took the lives of two police officers, the Twitter account at Reuters took the deception to a new level.

“Demonstrations in Louisville wore on past nightfall in defiance of a 9 p.m. curfew and remained mostly peaceful until several gunshots rang out in the midst of a skirmish between protesters and heavily armed police,” the post stated.

Demonstrations in Louisville wore on past nightfall in defiance of a 9 p.m. curfew and remained mostly peaceful until several gunshots rang out in the midst of a skirmish between protesters and heavily armed police https://t.co/lvEd2XalpJ pic.twitter.com/L8GrPNrwCg

The wording is instructive. “Mostly peaceful,” of course, is how the liberal media tries to portray every incident of urban unrest. “Shots rang out” as though guns fired themselves. And only the police were “heavily armed.”

The suggestion was that the shooting was the work of police — interrupting the “mostly peaceful” protests of Americans exercising their First Amendment rights.

And none of that was true.

Granted, an initial report might have no way of establishing who fired and what casualties might have taken place, but the idea that the “protests” were “mostly peaceful” is debunked by videos of what took place before that — while the sun was still up in central Kentucky.

At least it was debunked for those who wouldn’t consider crowds of fist-waving marchers chanting “burn it down” to be “mostly peaceful.”

As the BLM crowd chanted, “If we didn’t get it, burn it down!” they have marched outside the barricaded zone in Louisville and have shut down traffic in an intersection. pic.twitter.com/cIUtveA7xV

It also was debunked for those who don’t think a mob trying to physically force its way through a police line, as the New York Post reported happened in Louisville, qualifies as “mostly peaceful.” And then there’s the hurling of water bottles at police, also reported by the Post.

The New York Post, of course, has a conservative slant.

But even the undeniably left-wing Rolling Stone reported that the rioters Reuters called “mostly peaceful” had set a fire outside the courthouse.

An honest observer might get the idea there was nothing “mostly peaceful” about what was happening in Louisville before two police officers were shot. That this was not a “mostly peaceful” situation, but a powder keg about to explode, an increasingly dangerous situation that was escalating by the minute until someone decided to start shooting.

That same observer might think that maybe Reuters was deliberately presenting facts in a way to make a casual reader conclude that, once again, peaceful demonstrators, the flower children of the 21st century, had been attacked by “heavily armed police.” Instead, it was the police who had been attacked, making the suggestion essentially an exercise in victim-blaming.

Fortunately, anyone paying attention is fully aware of the lies the mainstream media has been shoveling Americans over the past four years of President Donald Trump’s administration.

And many social media users saw the Reuters tweet for the propaganda it was.

WARNING: The following tweet contains vulgar language that some readers may find offensive:

What the hell protest were you at? This one got violent and they started burning shit before it even got dark! https://t.co/mgM26O4BoL

“several gunshots rang out in the midst of a skirmish between protesters and heavily armed police” is a weird way of saying “BLM supporters opened fired on police and hit two officers”...

They tried to burn down the courthouse, threw water bottles at police, hitting one in the head and knocking him to the ground, smashed windows, shot two cops, but yes, other than that, peaceful. 🙄

Meanwhile, as CNN reported, 26-year-old Larynzo Johnson was identified as the suspect in the shootings that wounded one officer in the abdomen and the other in the thigh.

Spoiler alert: The suspect is not a cop.

“Police said witnesses observed Johnson firing at officers before fleeing the scene, and video of the incident obtained by law enforcement showed him shooting a handgun in the direction of police,” National Review reported. “Johnson was also in possession of a handgun when he was arrested, the complaint filed in Jefferson County said.”

Both wounded officers are expected to recover, Robert Schroeder, interim chief of the Louisville Metropolitan Police Department told reporters, according to CNN.

It’s always good news when two police officers wounded while protecting their city from a mob are expected to recover.

What isn’t going to recover though — at least not in this generation — is the credibility of an American mainstream media that has showered the country with lies with the deliberate attempt to skew the reality the country perceives.

Reuters is the guilty party in this particular incident, but virtually no mainstream media outlet is going to emerge from the Trump years as trustworthy – they’ve abused that privilege at every opportunity.

And Louisville was just one more opportunity for lies.