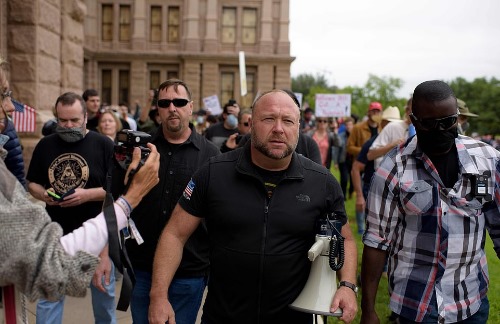 Alex Jones’ ex-wife has filed an emergency motion in Travis County District Court seeking custody of their daughters for at least the two weeks it will take to determine whether he contracted COVID-19 at a Saturday rally he led at the Capitol at which he was mobbed by unmasked supporters and declared the coronavirus “a hoax.”

The motion, filed late Sunday night by Austin attorney Tiffany Crouch Bartlett on behalf of Kelly Jones, his ex-wife, asks State District Judge Lora Livingtson to keep Jones from “exercising any physical possession of the children …. for at least the next fourteen days as Alex Jones has deliberately exposed himself to an estimated 300 people at a Texas Capitol rally which he organized on Saturday, April 18th, and during which he failed to use a mask, observe social distancing, or implement any safety measures to avoid infection during the Covid 19 pandemic — in blatant violation of local Travis County stay-at-home orders, and in violation of Texas and federal guidelines and recommendations.”

Jones was happy to shake hands with his followers as he left the rally. pic.twitter.com/ArkGyOLSfZ
— Nick Wagner (@WagsPhoto) April 18, 2020

Alex Jones arrived to a "You Can't Close America Rally" and the 300 or so protestors, most not wearing face masks, swarmed around him as he proclaimed the COVID-19 pandemic a hoax. #Texas #Coronavirus pic.twitter.com/8e3JuObj86

Attorneys for Alex Jones did not immediately respond to a request for comment Monday, but the staff attorney for Livingston asked for them to reply to the motion by 4 p.m. Monday.

The Joneses’ two girls, ages 12 and 15, were spending the weekend with their mother and were due to return to their father’s home Sunday evening. But, in light of Saturday’s rally in defiance and opposition to state and local stay-at-home orders, at which Jones shook hands with supporters who swarmed around him, Kelly Jones texted her ex-husband mid-afternoon Sunday that, “I have a duty to protect the children, and I cannot return them to you.”

But, in an affidavit filed with the court, Kelly Jones said that just before 6 p.m. Sunday, “I went to the kitchen to start dinner. I was in the kitchen for about two minutes. When I came out the children were gone. They texted me at 6:04 PM that they were at their dad’s (his home is around 10 minutes away from mine). Alex messaged me that he had picked them up.”

Update: Heartbroken & incredibly worried, my attny called Alex’s about the endangerment. I went into the kitchen for 2 minutes to start dinner, &Alex had lured the children from my home. Have called APD, filing emergency restraining order.

This is my ex husband, #AlexJones, endangering my children by violating State Orders, unmasked and surrounded by countless unmasked people, with no respect for authority of my children’s health.#COVID19 #CPS #GregAbbot#NYT
Pls RT. Do not allow my kids to go unprotected. pic.twitter.com/SWI11IqbXF

— Kelly Jones (@RealKellyJones) April 19, 2020Alex Jones and Kelly Jones live near each other in Austin. The two girls live with Alex Jones most of the time, spending two hours every Thursday and every other weekend with their mother. The Joneses’ 17-year-old son lives exclusively with his father. Jones and his second wife, Erika Wulff Jones, who was by his side at Saturday’s rally, also have a 3-year-old.

Jones, and Owen Shroyer, a host and reporter on InfoWars, Jones’ Austin-based conspiracy website, promoted and were the main speakers at Saturday’s “You Can’t Close America Rally” on the south steps of the Capitol.

Jones, who arrived at the rally in his armored vehicle, described the pandemic as both a “Chi-Comm globalist bioweapons attack” — “Chi-Comm” refers to Chinese Communists — and a fabrication.

Most of the 300 people in attendance ignored local requirements to wear facemasks, and state and federal guidance to remain at least 6 feet apart from anyone not a member your own household.

The new motion is the latest development is the latest legal skirmishing between Alex Jones and his ex-wife over custody of their children since their divorce in 2015.

They were awarded joint custody after a jury trial in 2017 and, for the first time since their divorce, Kelly Jones gained the right to have the two girls and their 17-year-old brother primarily live with her. But a series of orders by state District Judge Orlinda Naranjo, who presided over the trial, left the girls living most of their time, and the boy, all of his time, with their father.

At a pretrial hearing before the 2017 trial, attorney Randall Wilhite told Naranjo that using Alex Jones’ on-air InfoWars persona to evaluate Alex Jones as a father would be like judging Jack Nicholson in a custody dispute based on his performance as the Joker in “Batman.”

“He’s playing a character,” Wilhite said of Jones. “He is a performance artist.”

But Jones repudiated that strategy, and his willingness to expose himself to infection at Saturday’s rally would seem to confirm that he is not simply “playing a character.”

In early March, Kelly had filed another emergency motion with Livingston seeking to remove her two daughters from her husband’s home immediately after he was arrested for driving while intoxicated, though his blood alcohol level, in two breathalyzer tests, was just below the legal limit.

That motion noted that Erika Wulff Jones was also arrested for driving while intoxicated in August. Her blood alcohol level in her preliminary breath test far exceeded the legal limit, according to the police affidavit in the case.

In both cases, the arrests resulted from one spouse calling police about the other.

That hearing came on the eve of spring break, which the girls spent with Kelly Jones, before returning to their father’s home. Livingston also ordered that Alex Jones not drink when he has custody of the girls, or have alcohol in the house.

Jones also is the defendant in four lawsuits — for defamation and intentional infliction of emotional distress — filed in Austin by the parents of some of the children killed in a mass shooting at Sandy Hook Elementary School in Newtown, Conn., in December 2012. Jones and InfoWars repeatedly depicted the massacre as a hoax.