Larry Elder Wins Fight to Get on California Recall Ballot 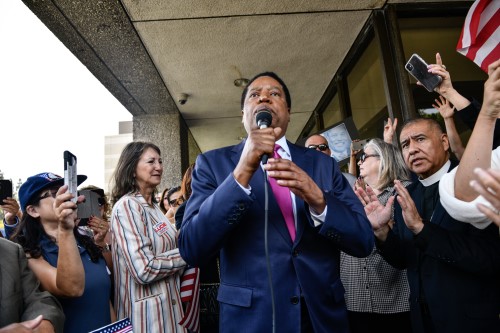 A California judge on Wednesday cleared the way for conservative talk radio host Larry Elder to join the field of candidates for an upcoming recall election that could remove Democratic Gov. Gavin Newsom from office.

Victory! My next one will be on Sept. 14 at the ballot box. https://t.co/mnvU6s5Wid#RecallGavinNewsom #WeveGotAStateToSave pic.twitter.com/qI2X3IBSHw

Elder, who is black, scored a swift court victory in Sacramento, where he challenged a decision by state election officials to block him from the ballot.

Superior Court Judge Laurie M. Earl disagreed with a state decision that Elder failed to meet requirements to qualify to run in the election. Forty-two other candidates have been cleared to appear on the Sept. 14 recall ballot.

On social media, Elder wrote, “Victory! My next one will be on Sept. 14 at the ballot box.”

“This isn’t just a victory for me, but a victory for the people of California. And not just those who favor the recall and support me, but all voters, including many who will come to know me,” he wrote.

The election in the nation’s most populous state will be a marquee contest with national implications, watched closely as a barometer of the public mood heading toward the 2022 elections, when a closely divided Congress again will be in play.

Elder’s court win also will be celebrated by recall organizers who hoped for a large field of prominent candidates to attract voters.

When Elder announced his candidacy, he immediately became one of the most recognized Republicans in the race, given his years on talk radio as well as appearances on Fox News and other media.