Jane Fonda: Politicians Who Don’t Share Her Views On Climate Change Should Be Tried As Nazi War Criminals At Nuremberg 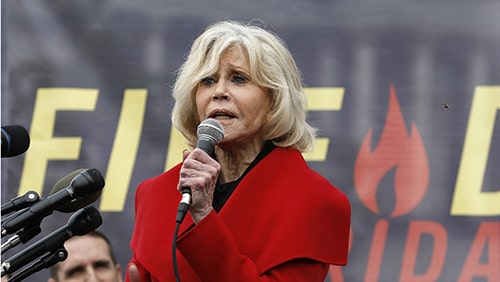 Jane Fonda has a message for the world.

The woman who made a splash posing on artillery with the North Vietnamese during the Vietnam War announced that politicians who don’t share her views on climate change should be treated like Nazi war criminals.

Jane made the proclamation during an interview with Michael Moynihan for Viceland’s The Impeachment Show.

Michael asked, “So, you want to see sort of a Nuremberg trial for climate criminals?”

That doesn’t seem to enhance the softer side of liberal politics’ trumpeting of tolerance.

Neither did the actress’s brother last year, when he offered this about a then-12-year-old in the White House:

“We should rip Barron Trump from his mother’s arms and put him in a cage with pedophiles and see if mother will stand up against the giant a*****e she is married to.”

To be fair to Jane, she believes climate change is the most important issue on earth. Therefore, though Al Gore was wrong in 2006 when he said we had a decade left, and despite scientists in the 70’s warning of the coming non-existent ice age, we happen to be right at the point in time when the bell-ringers are finally right on.

“This is the existential issue over all of the other issues. This is the looming ticking time bomb. We have to listen to the scientists who say we have eleven years to do what has to happen. And what has to happen is we have to stop all new fossil fuel extraction. No licensing, no permitting on public lands or waters. And then we have to gradually phase out the existing extractions over 30 years and make sure the workers that depend on the fossil fuel industry not only are trained for new jobs, but that those jobs are union jobs with good salaries and benefits that allow them to support a family.”

“You said Congress is bought off by the fossil fuel industry. If that is true, and that is true of the man in the White House is the same, what do we do? Where do we go from here?”

“Well, we get rid of them,” Jane replied.

Michael: How do we do that?

People whose actions have caused our soldiers to be harmed must be tried for crimes against humanity:

“I think that democracy is teetering on the edge of collapse … That’s why we need to go into the streets. Our government is being ruled by fossil fuel. That’s a fact that can be proven. The wars are being fought for oil. Our men and women are being killed and maimed, wounded psychologically and physically, because of oil. I mean, they should all be tried for crimes against humanity and nature.”