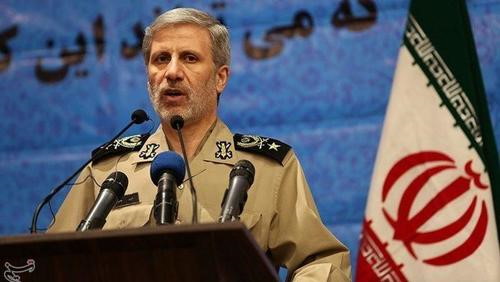 Iran has responded to a Fox News interview from late last week wherein Israeli Defense Minister Benny Gantz said that Israel is currently updating its plans to strike Iran’s nuclear program and is prepared to act independently if the United States is not willing. The interview was unusually blunt even for Israel in terms of the defense chief openly stating war plans.

Iranian Defense Minister Amir Hatami promptly fired back with a counterthreat on Sunday. He said Iran’s military will level Tel Aviv and Haifa should Israel do anything “out of desperation”.

“Sometimes, the Zionist regime [Israel] out of desperation makes big claims against the Islamic Republic of Iran to allegedly threaten it,” Hatami said as cited in The Times of Israel via Iranian state media.

“It must know that if it does a damn thing, we will raze Tel Aviv and Haifa to the ground,” he followed up with according to an English translation. Hatami was addressing a military ceremony.

He further assured that Iran possesses all the power it needs to “maintain the stability of the country” and said the Islamic Republic can strike close to Israel also via “resistance groups” – which is no doubt a reference to Lebanese Hezbollah and militia groups that have been fighting in Syria.

During Gantz’s Fox News statements two days ago, the defense chief had spelled out to the American correspondent that “If the world stops them [Iran] before, it’s much the better. But if not, we must stand independently and we must defend ourselves by ourselves.”

“The Iranian nuclear aspiration must be stopped… We must defend ourselves by ourselves,” Gantz had asserted.

Prime Minister Netanyahu has also issued similar warnings recently, however, Gantz’s words were the most specific and forceful thus far. He had even handed the Fox reporter what was purported to be a classified target list against Iranian assets that Israel prepared.

Gantz had also touted that Israel stands ready to attack Hezbollah positions throughout Lebanon and Syria – the latter country has been on the receiving end of Israeli airstrikes on a near weekly basis for much of the past year. The defense minister claimed that Hezbollah has “hundreds of thousands” of missiles aimed at Israel and is bent on the Jewish state’s destruction.