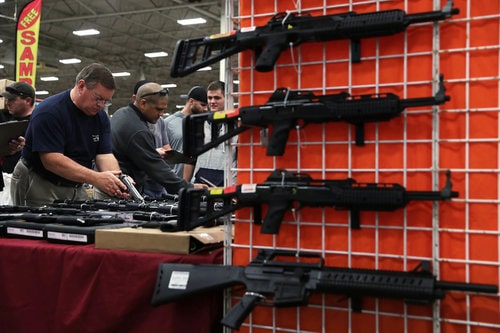 Gun retailers in Virginia are reporting a significant uptick in gun sales as the Commonwealth’s new Democratic legislature moves toward advancing its anti-Second Amendment agenda.

According to the Washington Examiner, at least one gun retailer is reporting a 200-percent increase in sales. Cash sales in particular have risen, as Democrats in Virginia have expressed interest in using credit card sales to track gun purchases.

“This is the largest Christmas and November, December that we’ve had, basically, since Trump has come on board. The only other person that was a better salesman right now is when we had President Obama,” one retailer told the Examiner.

As noted by the Daily Wire, the increase is notable in that gun sales under President Trump took a downturn, “likely because the Republican leader doesn’t pose the same threat to gun rights as his predecessor, Barack Obama.”

Newsweek made similar observations in 2017, noting the dramatic changes in gun sales under Obama versus under Trump. “President Barack Obama became known as America’s gun salesman in chief during his final years in office. And gun sales data backs that title up,” Newsweek wrote.

“Obama’s exit from the White House seems to have provided some Americans relief about the security of their Second Amendment rights,” it added. “Since President Donald Trump won election in November, gun sales appear to be going down.”

According to Jerry Rapp, owner of SpecDive Tactical in Alexandria, Virginia, however, Democratic Governor Ralph Northam and his fellow anti-Second Amendment advocates are having a similar effect to Obama in the Commonwealth. “Every time [Obama] turned around he was going to ban something or make something illegal. But even that isn’t even close to the amount of sales we’re selling right now of magazines, of guns, of every kind of gun from pistol, rifle, shotguns, to AR platforms,” the retailer explained. “We can’t keep it in stock.”

Virginians are fearful of over the aggressive anti-gun agenda proposed by the Democratic-controlled state legislature. Northam outlined this agenda during a November Cabinet meeting, in which he proposed “universal background checks, banning the sale of [semi-automatic firearms] and high-capacity magazines, restoring the law that limits purchases to one gun a month, and a red flag law that would empower a court to temporarily remove a gun from a person deemed to be a risk to himself or others,” the Washington Post reports.

SB 16 and SB 18 propose to ban semi-automatic “assault weapons,” raise the minimum purchase age to 21, and impose background checks for private firearm transfers. SB 64 strengthens current state law against so-called “paramilitary” activity by vaguely declaring an individual to be guilty of unlawful activity if he or she has the “intent” to intimidate a person or group — so this law will be in the eye of the beholder, and conservatives the likely ones being arrested by liberal police. Democrats have also proposed unconstitutional “red flag” laws that would permit courts to remove firearms from any individuals deemed as a danger to society or to themselves.

When asked specifically about gun confiscation, Northam responded “that’s something I’m working [on] with our secretary of public safety.”

More than 100 cities, towns, and counties in Virginia have declared themselves “sanctuaries” wherein anti-gun laws will not be enforced. Democrats claim the sanctuary status is unenforceable, but county sheriffs have promised to defend the sanctuary protections all the way to the Supreme Court, Fox News reports.

Moreover, Massie believes local law enforcement in these regions will not be deterred from upholding the sanctuary protections. “Somebody is going to jail,” Massie said. “And it’s probably going to be a public official. And God bless the public officials who are willing to do this so their constituents don’t have to.”

The New American’s Luis Miguel reported last week that a county sheriff has even vowed to deputize citizens if Democrats continue to infringe on Second Amendment rights. “Every Sheriff and Commonwealth Attorney in Virginia will see the consequences if our General Assembly passes further unnecessary gun restrictions,” Culpeper County Sheriff Scott Jenkins said. “I plan to properly screen and deputize thousands of our law-abiding citizens to protect their constitutional right to own firearms.”

Massie believes the overzealous gun-grabbers could “unwittingly put Virginia into play in the next presidential election.”

Meanwhile, the NRA has placed pro-Second Amendment billboards throughout Virginia to raise awareness of the Democrats’ agenda. “Anti-gun billionaires who invested millions in the 2019 Virginia elections expect a return on that investment. While we mobilize our members and supporters to defeat Governor Northam’s political gun grab,” said D.J. Spiker, NRA Institute for Legislative Action Virginia state director, “the NRA remains committed to working with those members of the General Assembly who are focused on finding real solutions to violent crime in Virginia.”