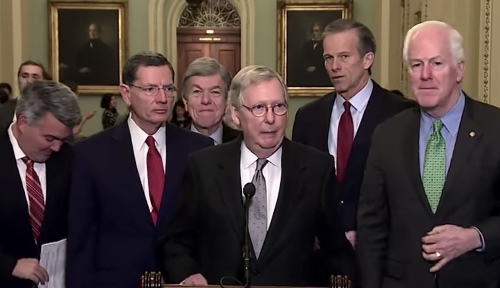 A group of Republican senators wants to expand concealed carry privileges for federal judges and prosecutors due to the increase in threats and violence that have come with the nature of those jobs.

“Prosecutors and judges make difficult decisions daily that have the potential to put them in harm’s way,” Loeffler said in a statement. “In a day and age when personal information is so easily accessible online, these public servants should be able to protect themselves and their families at all times."

They also note the uptick in threats and online harassment toward protected persons in data collected in a report by the U.S. Marshals Service.

In 2019, there have been nearly 4,500 incidents of threats and inappropriate communications toward people in these kinds of positions.

The bill also comes shortly after a gunman shot and killed the son of U.S. District Court Judge Esther Salas while posing as a UPS deliveryman on the steps of her New Jersey home.

Salas's son, Daniel Anderl, 20, was killed after opening the door to the man. His father and Salas's husband, Mark Anderl, also suffered injuries after being shot multiple times.

The man who opened fire was identified as Roy Den Hollander, an anti-feminist lawyer who crossed paths with Salas in a 2015 legal battle about a woman who wanted to register for the men-only military draft. Hollander allegedly attacked Salas over her racial identity in online posts at the time.

Hollander was found dead by an apparent self-inflicted wound shortly after the shooting of Daniel and Mark Anderl.

Salas, who recently spoke out about the incident, urged for change regarding how easily accessible personal information about federal judges is to find online.