'Flat-out pissed off': Mark McCloskey dismayed that prosecutor charged him but not rioters and trespassers 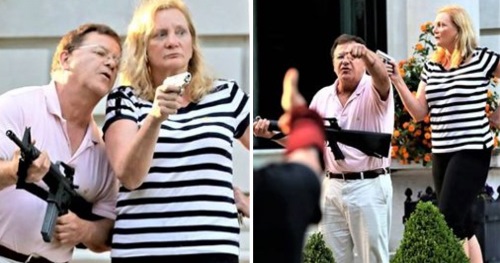 Mark McCloskey was shocked to hear that a St. Louis prosecutor had filed charges against him and his wife for defending their home while refusing to press charges against rioters and trespassers.

"It’s a totally upside-down world, Tucker," McCloskey told Fox News host Tucker Carlson on Monday. "The people that broke into my neighborhood, they were all trespassing. The guy that recruited it, that planned this event, said the next day that he intended to break the law, that he needed to break laws in order to send his message. None of those people are arrested. None of those people are charged."

"The prosecutor, the circuit attorney, has apparently decided that her job as a prosecutor isn’t to keep us safe from criminals but to keep the criminals safe from us. It’s a bizarre, upside-down world. I’ve been a little irritated by this process until today, now I am just flat-out pissed off. I mean, this has gotten to be outrageous," he added.

McCloskey and his wife Patricia were charged with one felony count of unlawful use of a weapon after they brandished their weapons on the front steps of their home when a group of protesters broke down their fence and trespassed into their private neighborhood. The charges, which were filed by St. Louis Circuit Attorney Kim Gardner on Monday, carry a sentence of one to four years in prison and fines of up to $5,000.

McCloskey noted that he has received support from "the White House on down" and that Missouri Gov. Mike Parson, a Republican, has already hinted that he would pardon the couple if they are convicted. He said that Gardner seems to be the only one who believes he acted illegally.

"It seems like the only person in the United States that thinks we did something wrong is our circuit attorney, but she is the same person that let out of jail everybody that was responsible for the looting and fires and destruction following the George Floyd death in the city of St. Louis. The only people that she wants to prosecute are the people that defended themselves against it and nobody else to my knowledge," he said.

Gardner has been criticized by law enforcement for her decision not to charge rioters who were arrested during the George Floyd protests in June. She declined to press charges against dozens who were arrested for assault, trespassing, vandalism, or unlawful use of a weapon. Gardner issued just two summons for the 36 arrests that took place in the first week of June.

When the mob came for Mark and Patricia McCloskey in St. Louis a few weeks ago, the police never came. They had no choice but to defend themselves. At the time, St. Louis prosecutor Kim Gardner promised retaliation against them. This afternoon she followed through and charged them with unlawful use of a weapon, a felony in the state of Missouri.