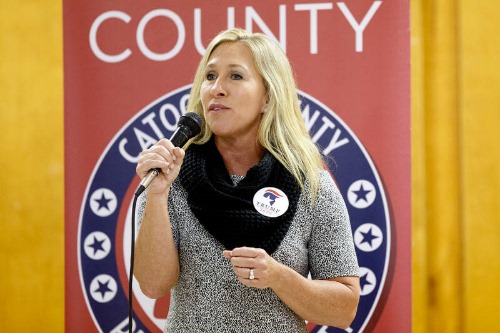 Facebook deleted a campaign ad from a GOP candidate in Georgia because she was brandishing a gun in the political commercial.

Marjorie Greene is running in Georgia's 14th District, and she already grabbed attention with a campaign ad where she warns Antifa to stay out of Georgia. In the ad, Greene is standing on the porch of a local business, and she is armed with an AR-15 semi-automatic rifle.

"I have a message for Antifa terrorists," Greene says. "Stay the hell out of Northwest Georgia."

"You won't burn our churches, loot our businesses or destroy our homes," Greene tells Antifa.

Greene posted the campaign ad on Tuesday, but it was deleted by Facebook on Thursday. Facebook told Greene's campaign that the ad was pulled because it violated the company's policies against promoting the use of firearms.

Facebook sent an email to Greene's campaign that said ads "must not promote the sale or use of weapons, ammunition, or explosives." Ads are also prohibited from "promoting the brandishing of firearms."

"Facebook lets Antifa organize terrorist attacks on America and allows videos of innocent Americans being brutally attacked, but pulls my post down," she told Fox News. "America is a country of law and order -- not anarchy. Telling Antifa thugs to stay out of northwest Georgia is not a violation of Facebook."

"We removed this ad, which advocates the use of deadly weapons against a clearly defined group of people, for violating our policies against inciting violence," Facebook said in a statement to Fox News.

Greene's Facebook ad reportedly reached more than 2 million people before being yanked from the social media platform. The video is still up on Twitter, where it has over 1 million views.

ANTIFA has declared war on our country.@realDonaldTrump responded by declaring them a domestic terrorist organization.

Here’s my message to ANTIFA terrorists:

Stay the HELL out of NW Georgia.

You won’t burn our churches, loot our businesses, or destroy our homes. pic.twitter.com/kBMh87G1ap

In another explosive campaign ad, Greene blows up a sign with "socialism" written on it. That ad was not pulled by Facebook.

My name is Marjorie Taylor Greene.

I am a proud American who is:

and I am running for Congress in Georgia’s 14th District.

Please share my video and consider following my campaign!

God bless you all! #MAGA pic.twitter.com/G5ElS5wjQr

Greene has purchased air time to run the ad on broadcast and cable TV in advance of Tuesday's primary.