Donald Trump Jr. Says Mitt Romney is “Officially a Member of the Resistance” 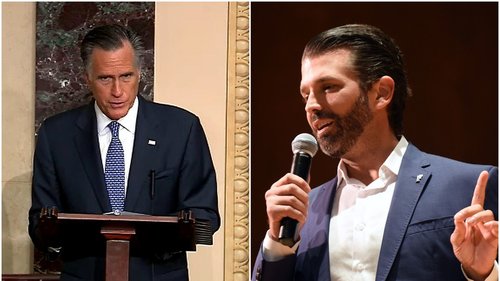 Sen. Mitt Romney (R-UT) told The Atlantic this week that he expected there to be “consequences” for his vote to convict President Donald Trump on an article of impeachment Wednesday, and Donald Trump Jr. wants to give the Utah Republican what he has coming. In a series of irate social media posts, the president’s eldest son took Romney to task for his betrayal and called for his expulsion from the Republican Party.

“Mitt Romney is forever bitter that he will never be POTUS. He was too weak to beat the Democrats then so he’s joining them now,” Don Jr. tweeted. “He’s now officially a member of the resistance & should be expelled from the @GOP. #ExpelMitt”

The president’s son is not the only one tired of Romney’s anti-Trump antics. In a series of tweets on Wednesday, his own former press secretary, Rick Gorka, concluded that his old boss was motivated not by principle but by jealousy.

“I believe Mitt Romney is motivated by bitterness and jealously that @realDonaldTrump accomplished what he has failed to do multiple times. His desire to pander to the chattering class has gotten the best of him…again,” Gorka wrote. “These are the same people that hated Mitt in 2012 and they will hate him again when they are done with him. It is sad to see that Mitt has not learned the lessons from 2012. Now he has betrayed his Party and millions of voters.”

Republicans in Romney’s home state of Utah are no happier with their elected representative. So irritated by Romney’s betrayal was State Rep. Tim Quinn that he introduced a new bill that would voters the chance to recall a sitting senator. Under Quinn’s bill, a recall election would be triggered if 25% of active voters signed on to a statewide petition. If signed into law, the bill could spell the beginning of the end for Romney’s short-lived Senate career.

It would be quite the delicious irony, would it not? The sole Republican to vote for Trump’s removal winds up getting removed himself? That’s the kind of political retribution that we can get behind.

Romney is a traitor, a phony, and a man with virtually zero constituency. If it weren’t for the name recognition he garnered in 2012, he’d be nobody at all. Time for him to go back to the private sector where he can be alone with his conscience and his principles.