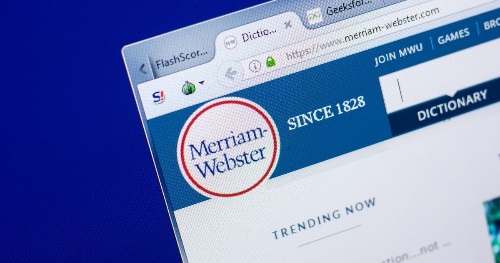 Well, you know that we’ve entered a whole new world of liberal propaganda when one of the most prominent and respected dictionaries in the country is changing the definitions of its words IN REAL TIME to match Democratic Party attacks on a Supreme Court nominee. That’s what happened Wednesday when Webster’s Dictionary quickly ran to change the definition of the word “preference” so that Democrats could feel good about piling onto Amy Coney Barrett.

For background, Barrett was asked by Sen. Dianne Feinstein about her opinions regarding the Obergefell decision that barred states from passing laws against gay marriage.

Later, desperate to score points against Barrett and pander to her LGBT supporters, Sen. Maizie Hirono (D-HI) raked Barrett over the coals for her choice of terms.

“I was disappointed that you wouldn’t give a direct answer and whether you agreed with the majority in that case or you instead agree with your mentor that no such right exists in the Constitution,” Hirono said. “So even though you didn’t give a direct answer, I think your response did speak volumes. Not once, but twice you used the term sexual preference to describe people in the LGBTQ community. And let me make clear: sexual preference is an offensive and outdated term. It is used by anti-LGBTQ activists to suggest that sexual orientation is a choice.”

Apparently knowing that it wouldn’t be long before conservatives flocked to the dictionary to show that Hirono doesn’t know what the hell she’s talking about, Merriam-Webster rushed to the rescue.

Seen here: The definition of “preference” in Webster’s a month ago…and then yesterday: 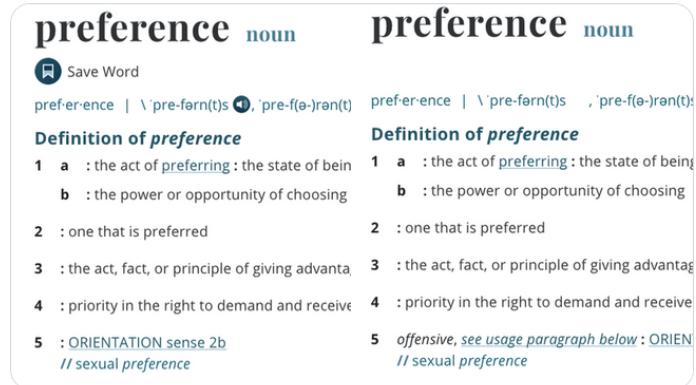 Notice definition #5. If you’re going to be deceptive, you have to at least be slick about it, guys.