Dems Attack Barrett, Calls Her a Handmaid with a “Clown Car Vagina” 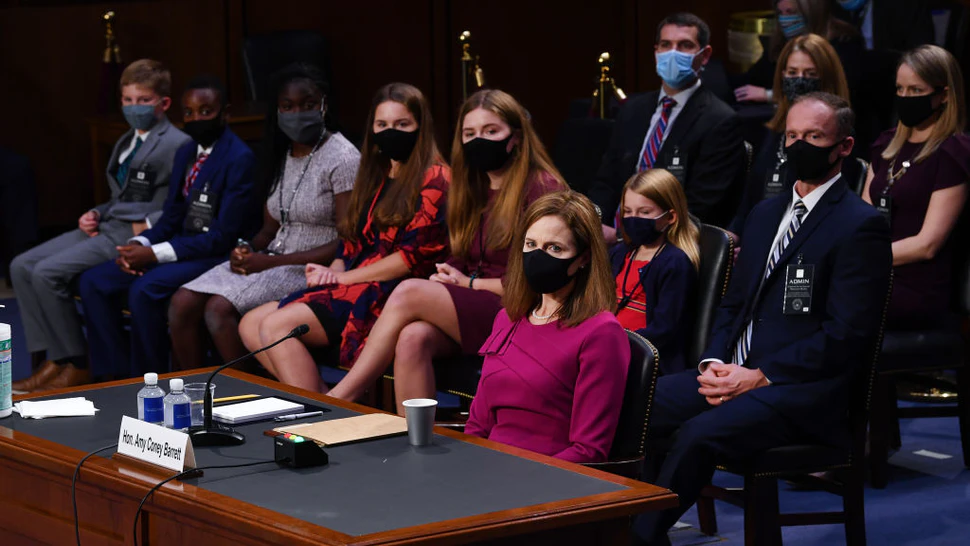 As Judge Amy Coney Barrett’s confirmation hearing begins, Democrats viciously attacked the Trump appointee by focusing on her conservative views and even degrading the judge for having a large family.

After Monday’s confirmation hearing, Feminist author Lauren Hough expressed her grave disdain against the judge. The author described Barrett as a “handmaid” with a “clown car vagina.” Hough said, “It’s a very weird thing to watch these old creeps congratulate a handmaid on her clown car vagina.”

The radical author went on to comment about the Judge’s decision to have a large family. She claimed that Barrett’s decision on legal disputes is simply based on her fertility. Since the judge had seven children, two of whom were adopted, Hough concluded that Barrett had proved she does not need a “cervix check.”

Despite advocating for the empowerment of women, Hough also undermined the judge’s accomplishment by saying that she would like to share house tips with Barrett, such as tips on how to make a great casserole recipe and stain removal, a topic that is usually associated with the traditional roles of being a housewife.

You can tell a lot about how a judge will rule by her fertility so I’m glad she’s already proven hers because the cervix check really shouldn’t be done live. But I’m excited for her to share her casserole recipe and some stain-removal tips.

Hough’s vile comments reference Margaret Atwood’s fictional book, “The Handmaid’s Tale.” The story revolves around the women who were forced to serve as “handmaids,” whose sole purpose is to bear a child for the rich and powerful.

Other Democrats also chimed in. Washington Post contributor Jill Filipovic claimed that Republicans were more proud of Barrett having seven children than her own persona; accomplishments as a judge. With this, Filipovic wrote that the GOP politicians are only spreading the message that despite their overwhelming success, a woman’s worth is still measured by her ability to have children. “It’s almost like the message is, ok, you’re a very successful Career Woman, but you’ve justified your selfish ambitions by having seven kids, so it’s ok,” the left-wing author wrote.

It does seem telling that the Republicans who have spoken so far have emphasized Amy Coney Barrett's fertility and family size. It's almost like the message is, ok you're a very successful Career Woman, but you've justified your selfish ambitions by having seven kids so it's ok.

Another writer from the Washington Post shared Filipovic’s sentiments; WaPo’s contributor, Helaine Olen, wrote that she had grown tired of hearing Barrett’s children and family size. Olen wrote that while the Judge was able to handle having seven kids, which in itself is already an accomplishment, she argued that Barrett is not being appointed for a “parenting position.”

Well, clearly Amy Coney Barrett is not taking my advice.

On Tuesday, Democrats continued to push Barrett to assert her views on the landmark abortion case of Roe vs. Wade. During the confirmation hearing, Democrat Sen. Dianne Feinstein pressed Barrett to respond to Justice Scalia’s ruling over Roe vs. Wade. However, Barrett refused to share her opinion on the matter. She explained that as a sitting judge, she could not share her approval or disapproval on issues that might affect pending cases. Barrett added that she feared she could influence and tilt such decisions.

This is not the first time that Democrats have criticized Barrett’s decision to have a large family. When President Donald Trump announced her nomination, several Democratic supporters bashed Barrett and even targeted her two adopted children from Haiti.

Just last week, far-left media outlet, Washington Post also went on to spread false rumors that Barrett’s children have contracted the COVID-19 virus, following the President’s diagnosis, and even adding that they can potentially become a “superspreader.”