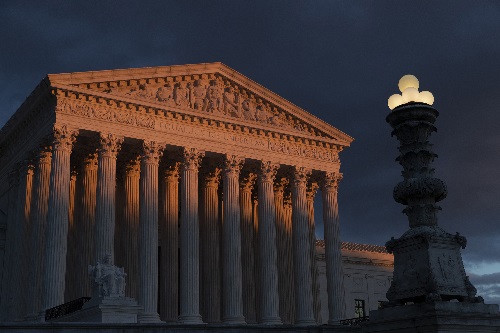 Democrats issued a stark warning to Republicans this week: Don’t fill a Supreme Court vacancy in 2020 or face the consequences.

The threat comes as there’s a possibility that a spot on the Supreme Court could open up before President Donald Trump’s term ends in January. If that were to happen, Senate Majority Leader Mitch McConnell has said that he would start confirmation hearings even if Trump weren’t to win re-election.

The Democrats don’t like this because McConnell refused to start confirmation hearings for then-President Barack Obama’s Supreme Court choice in 2016, saying it would be best to wait to do so until the next president took office in 2017.

“We knew basically they were lying in 2016, when they said, ‘Oh, we can’t do this because it’s an election year.’ We knew they didn’t want to do it because it was President Obama.”

Kaine said that if Republicans change their stance this year, and confirm a justice in an election year, Democrats could consider changing the law to add seats to the Supreme Court. That would potentially swing the balance of the court from its current conservative majority.

“If they show that they’re unwilling to respect precedent, rules and history, then they can’t feign surprise when others talk about using a statutory option that we have that’s fully constitutional in our availability,” Kaine said. “I don’t want to do that. But if they act in such a way, they may push it to an inevitability. So they need to be careful about that.”

This isn’t all talk from Kaine, a former vice presidential running mate, though. Sources have told NBC News that the Democratic National Committee is set to add language to their 2020 platform that would endorse “structural court reforms to increase transparency and accountability.”

D draft of the language that NBC News obtained specifically attacks Republicans for having “packed our federal courts with unqualified, partisan judges who consistently rule for corporations, the wealthy and Republican interests” and also for “blocking a Democratic president from appointing a justice to the Supreme Court.”

Trump this far has nominated and had successfully confirmed two appointees to the Supreme Court — Neil Gorsuch in April 2017 and Brett Kavanaugh in October 2018. These two appointees tilted the balance of the high court to a 5-4 conservative majority.

Despite this, conservatives haven’t been successful in some recent major decisions. Chief Justice John Roberts has broken ranks and voted with liberals to block restrictive abortion laws and also to uphold the Deferred Action for Childhood Arrivals (DACA) program.

There are no current openings on the Supreme Court. However, there have been whispers that there could be one or more opening up in the near future. Ruth Bader Ginsburg has dealt with health issues recently, and rumors have swirled that Clarence Thomas may retire soon. He has up until this point denied that he plans on stepping down from the court, though.