Dave Chappelle: First Amendment Only Safe Because of the Second Amendment 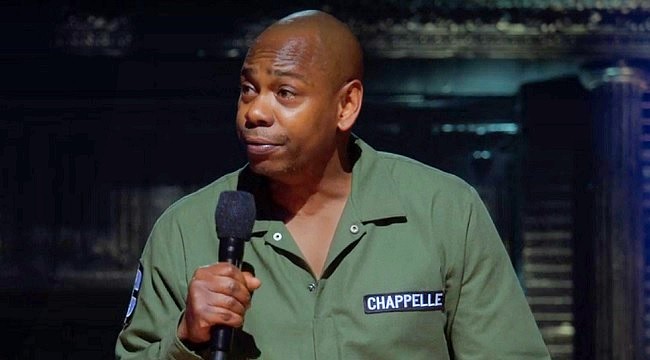 In what amounts to a no-holds-barred comeback tour, comedian Dave Chappelle is taking every opportunity to shoot straight, defy expectations, and leave audiences slack-jawed as he says the things so many of us feel.

Chappelle’s latest gasp-inducing statement has managed to endear him to many Americans who likely have paid little attention to the controversial comedian in the past.

In a speech — purportedly unscripted — given in acceptance of the Mark Twain Prize for American Humor, Chappelle surprised the staid Kennedy Center crowd with his description of the purpose of the Second Amendment.

Referring to the cancel culture and its mania for ruining the careers of comedians accused of being racist or homophobic, Chappelle said: “Don’t get mad at ’em, don’t hate on ’em,” Chappelle said Sunday. “Man, it’s not that serious. The First Amendment is first for a reason. Second Amendment is just in case the first one doesn’t work out.”

That’s right. Dave Chappelle described the purpose of the Constitution’s protection of the right to keep and bear arms is to guarantee the perpetuation of the protection of freedom of speech, as set out in the First Amendment.

As for the First Amendment, Chappelle’s commitment to that article’s prohibition on any congressional attempt to squelch speech that might be offensive to the powerful is par for the course. Nothing is more Chappelle-esque than speech that irks the establishment. “It’s the best part of the First Amendment to me that I’m able to express myself this way and make a viable living doing it,” Chappelle said during an interview with NPR in the hours before accepting the annual award.

Regarding the role played by the freedom of speech in the protection of liberty, the Anti-Federalist Cincinnatus wrote in his second letter: “All great and honest politicians, like yourself, have reprobated it. Lord Mansfield is a great authority against it, and has often treated it as the worst of libels. But such men as Milton, Sidney, Locke, Montesquieu, and Trenchard, have thought it essential to the preservation of liberty against the artful and persevering encroachments of those with whom power is trusted.”

John Milton, the English poet and friend of freedom, expressed a desire that surely Dave Chappelle shares: “Give me the liberty to know, to utter, and to argue freely according to conscience, above all liberties.”

As for the ability of arms to secure the blessings of free speech against the ambitions of tyrants, perhaps no one explained that relationship better than James Madison. Madison wrote in Federalist, No. 46:

Besides the advantage of being armed, which the Americans possess over the people of almost every other nation, the existence of subordinate governments, to which the people are attached, and by which the militia officers are appointed, forms a barrier against the enterprises of ambition, more insurmountable than any which a simple government of any form can admit of. Notwithstanding the military establishments in the several kingdoms of Europe, which are carried as far as the public resources will bear, the governments are afraid to trust the people with arms. And it is not certain, that with this aid alone they would not be able to shake off their yokes. But were the people to possess the additional advantages of local governments chosen by themselves, who could collect the national will and direct the national force, and of officers appointed out of the militia, by these governments, and attached both to them and to the militia, it may be affirmed with the greatest assurance, that the throne of every tyranny in Europe would be speedily overturned in spite of the legions which surround it.

In his A View of the Constitution of the United States of America, William Rawle echoed Madison’s description of freedom’s dependence on an armed populace for its perpetuation: “The militia form the palladium of the country. They are ready to repel invasion, to suppress insurrection, and preserve the good order and peace of government.”

I have first-hand experience with the understanding many have of the future of freedom and its dependence on the right of Americans to keep and bear arms. While covering the debates on the Arms Trade Treaty at the United Nations, the ambassador from Spain told me that the only thing standing between the complete disarmament of civilians throughout the world was the Second Amendment of the U.S. Constitution.

Admittedly, this revelation is not authoritative and doesn’t necessarily reflect the reality of the globalists’ effort to place all weapons within the monopoly control of government. It is, however, an admission that there may still be hope for the ability of Americans, and others who value liberty, to push back against the plutocrats and their zealous drive to disarm all who could oppose their rule.

Dave Chappelle is no hero of the Right and it is unlikely that his view of the scope of the Second Amendment’s protection is as vast as those of constitutionalists.

That said, his identification of an armed people as the only guarantor of liberty is a positive portrayal by a public figure and that is commendable.