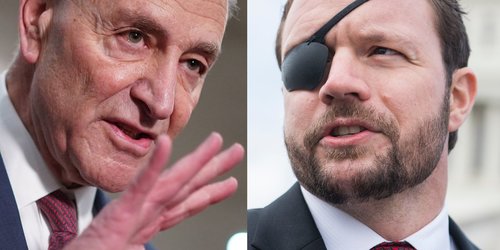 Sen. Chuck Schumer, D-N.Y., tried to spread some misinformation about the coronavirus and the developments of a vaccine on social media this weekend.

It had almost gone unnoticed, but Rep. Dan Crenshaw, R-T.X., caught him.

President Donald Trump had complained over the weekend that former President Barack Obama’s administration’s rules had made the CDC “inadequate and slow” in their testing for the pandemic.

“President Trump is once again trying to blame the previous administration for the number of tests available,” Schumer tweeted. “This is his #DailyLie. Enough, President Trump. Stop trying to deflect blame and just get to work. Prioritize health and safety and get a handle on testing NOW.”

Crenshaw shot back at Schumer, and said no one was to blame.

He called for civility and unity during the national crisis.

He also shared a video on YouTube from the CDC that addressed myths and facts related to the coronavirus.