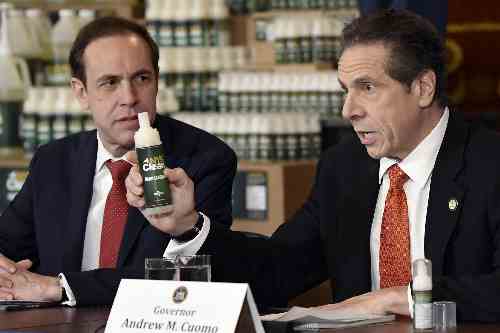 I rarely find a Democratic leader than I can actually respect. But every once in awhile, I do. Blame it on my mother, who tried to teach me to see the good in everyone. And this year, especially during the coronavirus outbreak and subsequent effort to stop it’s spread, one Democrat has seemed to stand above the rest.

Since the outbreak, he has seemed to turn a new page, making a valiant effort to work with the White House and President Trump, a man who has vastly different political views, to actually get things done. On top of taking the President’s advice and even commending our Commander in Chief, he has stood at the forefront of this fight and proclaimed that we cannot give in to “fear and panic” for that might devastate the nation more than the virus itself. And he is right.

He has also made conscious efforts to actually give the people and his state what is needed, not just what would further his liberal agenda, as some others have. And for that, I nearly respected the man.

However, it seems that respect was misplaced after all.

I know, I should have known better. But Cuomo really seemed to be doing some good. Well, except for his constant flip-flopping on whether President Trump is doing what is right and needed for our nation during this pandemic.

But Wednesday brought the revelation that what the liberal governor said he was doing might not really be all that truthful.

Remember back in early March when Cuomo announced that due to the terrible shortage of medical supplies in his state and everywhere else, he would be instructing facets of the New York government to create their very own hand sanitizer? I know, with all that’s been going on, it seems like ages ago.

Cuomo told the press on March 9 that his state would be making a “superior” hand sanitizer, containing 75 percent alcohol (5 percent more than that of the leading Purell brand), to combat the disease. According to the governor, it would be called NYS Clean and would be given out to the Metropolitan Transit Authority, several government agencies, schools, and not-for-profits.

In addition, the new state product would be priced much lower than most of its competitors, due to the extreme shortage and price gouging that seemed to be taking over the market. Cuomo could afford to keep the new hand sanitizer at a low price because it was to be made and packaged by the New York State Department of Corrections system and the prisoners there. The hand sanitizer even had a “nice floral bouquet,” as the Cuomo stated.

However, it seems the state really isn’t making its own product. Instead, it’s just repackaging it and selling it as its own.

Vice’s Katie Way reported on Wednesday, “According to workers at Great Meadow Correctional Facility in Comstock, New York, where the hand sanitizer is being ‘made,’ as well as a spokesperson for the prison system, they are doing nothing more than taking existing hand sanitizer and rebottling it into packaging labeled NYS Clean.” She added, “the hand sanitizer itself is being produced by an outside vendor he would not name; the Great Meadow Facility is only bottling and labeling it.”

Furthermore, the prisoners who are “making” the product are getting paid “a whopping $2 an hour,” according to one inmate. The same man also noted that he and others were being “completely overworked” and “they treat us like s– .”  And while I am not overly concerned that convicted criminals are not actually making much money doing this ‘job,’ this has been a plight of the liberal agenda for some time now.

The whole situation begs the question of why. Why would Cuomo do this, both the project itself and lying about it? What did he hope to gain?

Some have speculated this might have less to do with the spreading virus and more about the election coming up in November. Clearly, both Joe Biden and Bernie Sanders have lost their edge. And that leads many to believe that a brokered convention could add Cuomo’s name to the ballot. It’s a long shot for sure, but technically doable.

If he put on a good enough front of leading the effort to combat the virus, the DNC might just like him better than either current candidate. Of course, he probably also thought it would take the truth longer to come out.