China’s State-Controlled Media Mocks Trump For Getting Coronavirus: ‘Paid The Price,’ May ‘Negatively Affect His Re-Election’ 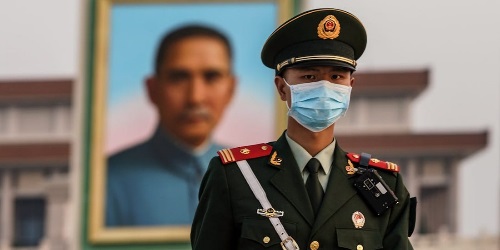 A lead voice from China’s state-controlled media mocked President Donald Trump on Friday after the president announced that he had been diagnosed with the coronavirus that originated in China.

In response, Hu Xijin, editor-in-chief of the Chinese state-controlled Global Times, wrote on Twitter: “President Trump and the first lady have paid the price for his gamble to play down the COVID-19. The news shows the severity of the US’ pandemic situation. It will impose a negative impact on the image of Trump and the US, and may also negatively affect his reelection.”

President Trump and the first lady have paid the price for his gamble to play down the COVID-19. The news shows the severity of the US’ pandemic situation. It will impose a negative impact on the image of Trump and the US, and may also negatively affect his reelection.

Hu’s attack on Trump came after the president announced on Twitter that he and the first lady had been infected with the coronavirus.

This evening I received confirmation that both President Trump and First Lady Melania Trump have tested positive for the SARS-CoV-2 virus. The President and First Lady are both well at this time, and they plan to remain at home within the White House during their convalescence.”

The White House medical team and I will maintain a vigilant watch, and I appreciate the support provided by some of our country’s greatest medical professions and institutions. Rest assured I expect the President to continue carrying out his duties without disruption while recovering, and I will keep you updated on any future developments.

The coronavirus originated in Wuhan, China, sometime late last year and has resulted in well over 1,000,000 people dying around the world.

The pandemic took off after local Chinese officials in Wuhan hid information about the outbreak from China’s central leadership, according to The New York Times. When top Chinese officials, including Chinese President Xi Jinping, learned about the severity of the pandemic they continued to delay taking action to stop the coronavirus from spreading. The Associated Press reported that Xi knew for at least six days that the nation was facing a severe pandemic before he finally warned the public. Studies conducted shortly after the outbreak became pandemic have found that had China acted earlier, the extent of the outbreak would have been reduced by 95%.

National Counterintelligence and Security Center (NCSC) Director William Evanina said in a statement that China prefers that Trump not win.

“We assess that China prefers that President Trump – whom Beijing sees as unpredictable – does not win reelection,” the assessment said. “China has been expanding its influence efforts ahead of November 2020 to shape the policy environment in the United States, pressure political figures it views as opposed to China’s interests, and deflect and counter criticism of China. Although China will continue to weigh the risks and benefits of aggressive action, its public rhetoric over the past few months has grown increasingly critical of the current Administration’s COVID-19 response, closure of China’s Houston Consulate, and actions on other issues. For example, it has harshly criticized the Administration’s statements and actions on Hong Kong, TikTok, the legal status of the South China Sea, and China’s efforts to dominate the 5G market. Beijing recognizes that all of these efforts might affect the presidential race.”