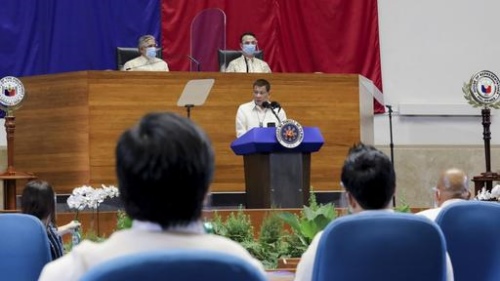 China will grant Philippine President Rodrigo Duterte’s request for access to any coronavirus vaccine developed by Chinese researchers, a senior diplomat said in an apparent effort to woo the key U.S. ally.

“The Philippines is a friendly, close neighbor, and we will give priority to its needs once we succeed in developing a vaccine,” Chinese Foreign Ministry spokesman Wang Wenbin said Tuesday.

The diplomat made that show of beneficence one day after Duterte stated his aversion to the establishment of an American military base in his country, a position that also drew approval from Wang. China has used medical supplies for strategic advantage throughout the pandemic, however, and U.S. observers think that Duterte seeks to make Washington and Beijing compete for his fidelity.

“Duterte is obviously going to use the China and the United States competition to his advantage, to his benefit,” said Sen. Cory Gardner, a Colorado Republican who chairs the Senate Foreign Relations subcommittee for East Asia and the Pacific. “But he also understands that the Philippines will thrive with the U.S.-led world order, and the Philippines will be subservient [in] a China-led world order.”

The Philippine leader’s pronounced inclination to jostle his country’s alliance with the United States while currying favor with the neighboring communist power threatens to have significant consequences for the U.S. military. He has expressed an interest in scrapping a key military agreement with the U.S., and he rebuffed Secretary of State Mike Pompeo’s recent statement of support for the Philippines in a territorial dispute with China in a speech that also featured an appeal for aid from Beijing.

“Four days ago, I made a plea to Xi Jinping: 'Can we be one of the first to have it … or can we buy it?'" Duterte said Monday, referring to the vaccine and the general secretary of the Chinese Communist Party.

Some American strategists see the Philippines as a home for the land-based missiles or fighter jets that would need to be available in a conflict with China.

That dynamic may explain why China applauded Duterte’s aloofness toward the U.S. moments before touting Beijing’s willingness to cooperate with Manila on public health issues.

“We appreciate President Duterte's remarks and stand ready to properly resolve maritime disputes with the Philippines through friendly consultations,” the foreign ministry spokesman said. “Since the outbreak of COVID-19, China and the Philippines have been standing together with mutual assistance, turning anti-epidemic cooperation a new highlight in bilateral relations.”